The FOMC may have concluded its meeting and announced its changes to policy on Wednesday evening, but the sharp drop in prices of gold and silver only came on Thursday. In other news: The U.S jobless claims rose by 10k to reach 379k; Philly fed index remained nearly unchanged during December at 7%. These news items don’t show much change in the U.S economy. On today’s agenda: GB Current Account, Canada Core CPI, Canada Core Retail Sales, U.S GDP 3Q 2013 Estimate, and Japan’s monetary policy meeting.

Here is a short overview for precious metals for Friday, December 20th: 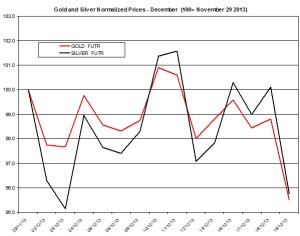 The ratio between the two precious metals rose on Thursday to 62.37. During December, the ratio slightly slipped by 0.25% as silver has moderately out-performed gold. 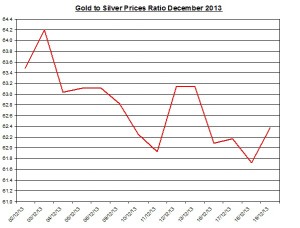 The gold and silver futures volumes of trade have increased and reached on Thursday 219 thousand and 51 thousand, respectively. The volume of trade is likely to fall again today following the FOMC’s decision.

The table below summarizes the changes in precious metals prices during the day the FOMC makes its announcement and the following day from the past couple of years.

This decision may have been among the reasons for the sharp fall in prices of gold and silver during yesterday’s trading. This was the strongest negative reaction for gold since the June meeting, when the Fed announced the possible tapering of QE3 this year. For silver, last time’s meeting had a sharper impact on its price.

GB Current Account: This quarterly report will show any changes in the gap between the impost and exports as of the recent quarter. Based on the latest update, the deficit contracted to 13 billion pounds.  This report might affect the direction of the British Pound;

Canada Core Retail Sales (October 2013): This report will refer to the manufacturing sales in Canada as of October. It may affect the USD/CAD currencies pair, which is strongly correlated with commodities. In the previous report regarding September 2013, manufacturing sales remained unchanged;

On Thursday, the Eur/USD currency pair declined again by 0.18% to 1.3661. During December, the Eur/USD increased by 0.52%. On the other hand, other currencies such as the Canadian dollar slightly appreciated yesterday against the U.S dollar by 0.07%. The correlations among gold, silver and Euro have further weakened again in recent weeks, e.g. the correlation between the Euro/USD and gold price is only 0.14 during November-December. This could suggest the developments of the gold and silver prices have little to do with the shifts in the forex market.

← Gold and Silver – Daily Outlook for December 19th
Natural Gas Bounced Back to $4.4 →