The prices gold and silver resumed their rally, much like the U.S stock market. Further, the rise of major foreign exchange rates including the Euro Aussie dollar and Canadian dollar against the USD may have also contributed to the recovery of bullion rates. Today the U.S non-farm payroll report will be published. It usually has a clear and substantial effect on the commodities, stocks and forex markets. Some estimate the number of jobs added will reach nearly 140k for August. According to ADP the number of jobs added was 201k. Several reports and headlines came out yesterday that may have affected the markets yesterday: U.S jobless claims declined by 12k to reach 365k. ECB left the rate unchanged at 0.75%, but the President of ECB introduced his bond purchase plan. The plan could help countries such as Spain and Italy in raising debt. ISM non-manufacturing PMI rose to 53.7% in August.  Currently the prices of gold and silver are falling. There are reports that India may raise import tax which could curb the demand for gold. There are several other news items of today’s agenda including: Great Britain Manufacturing Production, Great Britain PPI Input, Chinese CPI and Canada’s Employment Report.

Here is a short outlook for precious metals for Friday, September 7th:

In the chart below are the developments of normalized prices of precious metals in the last couple of weeks (normalized to 100 as of August 15th). During recent weeks gold and silver had a steady recovery. 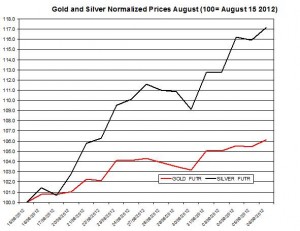 The ratio between the two precious metals edged up on Thursday to 52.2. During September the ratio declined by 2.74% as silver out-performed gold. 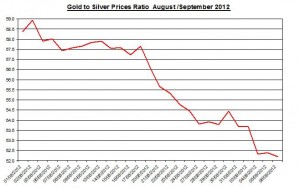 U.S. Non-Farm Payroll Report: in July, the number of non-farm payroll employment rose by 163k; the U.S unemployment rate reached 8.3%; if the upcoming report will continue to show growth of above 120 thousand (in additional jobs), this may lower the chances of the Fed introducing additional stimulus plan in 2012; this report may affect not only the U.S dollar, but also bullion prices; the table below shows the relation between gold silver Euro and the changes in employment in the U.S. in the last couple of times, the relation seems to have shifted from a negative relation to positive. 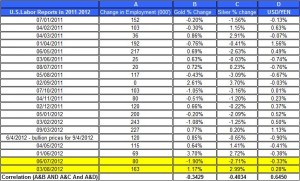 Great Britain Manufacturing Production: in the last report regarding June the index declined by 2.9% (M-2-M); this news may affect the British Pound;

Great Britain PPI Input: in the previous report regarding July the input price rose by 1.3% (M-2-M); this news may affect the British Pound;

Canada’s Employment Update: In the recent employment report for July, unemployment edged up to 7.3%; the employment fell by 30k during the month. The upcoming report might affect the Canadian dollar and consequently the prices of commodities (see here the recent report);

Chinese CPI: during July the Chinese inflation rate declined to an annual rate of 1.8%; this rate is well below China’s inflation target of 4% in annual terms. If the inflation will continue to dwindle it could indicate that China’s economic progress continues to slow down; China is among the leading countries in importing commodities;

The Euro/ USD rose on Thursday by 0.24% to 1.2631. During the week, the Euro/USD rose by 0.41%. Further, other currencies such as Aussie dollar and CAD also appreciated on Thursday against the USD by 0.9% and 0.77%, respectively. The linear correlation between gold and Euro is still strong: during August-September, the correlation between the gold and EURO/USD was 0.53 (daily percent changes). Therefore, if the Euro will continue to rise against the USD, it could also help rally precious metals rates. Currently, the Euro/USD is rising.

Current Gold and Silver Rates as of September 7th

Precious metals resume their recovery yesterday and may continue on this path during the day. The upcoming non-farm payroll report might be even better than last month’s figures. In such a case, it is likely to rally the markets including stocks and commodities. On the other hand, the news of India’s consideration to raise import tax could adversely affect the prices of precious metals. India is the world leading importer of gold. Today’s Great Britain Manufacturing Production and PPI Input might have a modest effect on the British Pound.  Finally, if the Euro and other “risk currencies” will further rise during the day they could pressure up precious metals prices.