Here is a short outlay for precious metals for Thursday, August 1st:

In the chart below are the normalized rates of precious metals for 2013 (normalized to 100 as of June 28th). The prices of gold and silver declined again last week. 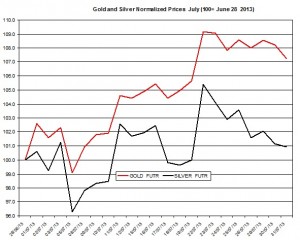 The ratio between the two precious metals fell on Wednesday to 66.86. During July, the ratio rose by 6.27% as gold slightly out-performed silver. 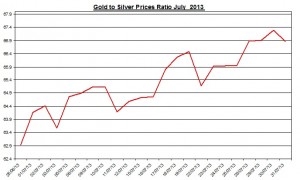 See here the weekly outlook of gold and silver for July 29- August 2.

Italian and Spanish Manufacturing PMI: These reports will pertain to July 2013. During June, the Italy’s index rose to 49.1; Spain’s PMI rose to 50. This means the manufacturing sectors in these countries are slowly improving; these indexes may affect the Euro;

BOE Rate Decision & Asset Purchase Plan: Bank of England will come out with its basic rate for August 2013; the MPC will also state of any new changes to its asset purchase pogrom; as of July, BOE kept its rate flat at 0.5% and the asset purchase plan s at £375 billion;

ECB Rate Decision: ECB will announce its cash rate for August. Following the last meeting in which the ECB kept its rate at 0.50%, Draghi’s decision could stir up the Euro market. Some suspect he may keep ECB’s monetary policy with no changes. The recent shift in Draghi’s sentiment with his positive remarks regarding his projections for the future development of the EU economy could further pull up the Euro against leading currencies;

U.S. Manufacturing PMI: This report will refer to July 2013. In June, the index bounced back to 50.9%; this means the manufacturing is growing;

The Eur/ USD currency pair rose on Wednesday by 0.29% to 1.3302. During July, the Euro/USD rose by 2.24%. Conversely, other currencies such as the Aussie dollar depreciated again yesterday against the U.S dollar by 0.87%. The correlations among gold, Euro and Aussie dollar remained robust, e.g. the correlation between the Euro/USD and gold price is 0.53 during July.

Current Gold and Silver Rates as of August 1st

Here is a reminder of the top events and reports that are scheduled for today and tomorrow (all times GMT):