The prices gold and silver didn’t do much yesterday as they both edged down after had hiked in the previous days. Major foreign exchange rates shifted with an unclear trend as the Euro appreciated against the USD while other “risk currencies” such as Aussie dollar and Canadian dollar declined against the US dollar. Currently gold and silver prices are rising. There are many news items of today’s agenda including: Bank of England Rate decision & Asset Purchase Plan, ECB Press Conference and Euro Rate Decision, U.S. Jobless Claims, U.S. ISM Non-Manufacturing PMI and Australian Trade Balance.

Here is a short outlook for precious metals for Thursday, September 6th: 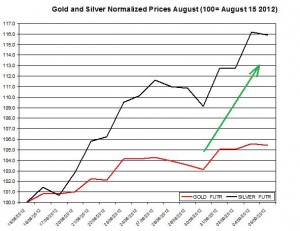 The ratio between the two precious metals edged up on Wednesday to 52.4. During September the ratio declined by 2.4% as silver out-performed gold. 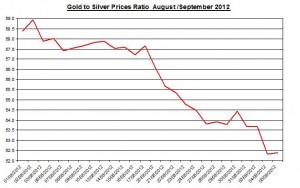 ECB Euro Rate Decision: In the July rate decision the President of ECB, Mario Draghi cut the EU interest rate to 0.75%; in August the rate remained flat. Since many EU countries are still struggling, ECB might decide to make another rate cut in the near future by another 0.25pp. If ECB will cut the rate again, it may affect the Euro to US dollar exchange rate;

U.S. Jobless Claims Weekly Report:  in the latest report the jobless claims remained unchanged at 374,000; this upcoming weekly report may affect the U.S dollar and consequently the prices of commodities;

Great Britain Rate & Asset Purchase Plan: Bank of England will announce its basic rate for September 2012 and of any changes in its asset purchase plan; as of August the BOE’s rate remained flat at 0.5% and the asset purchase plan also remained £375 billion;

Australian Trade Balance: In the recent report, the seasonally adjusted balance of goods and services nearly didn’t change and expanded by only $9 million in June 2012. The export of non-monetary gold rose by $246 million (17%); if the gold exports will continue to rise in July, it might suggest an increase in demand for non-monetary gold;

The Euro/ USD edged up on Wednesday by 0.28% to 1.2601. During the week, the Euro/USD rose by 0.2%. On the other hand, other currencies such as Aussie dollar and CAD depreciated on Wednesday against the USD by 0.31% and 0.45%, respectively. The linear correlation between gold and Euro is still strong: during August-September, the correlation between the gold and EURO/USD was 0.50 (daily percent changes). Therefore, if the Euro will continue to rally against the USD, it could also help the recovery of precious metals. Currently, the Euro/USD is trading up.

Current Gold and Silver Rates as of September 6th

Precious metals didn’t do much yesterday but they have had an upward trend in recent weeks. There are many items on today’s agenda that could affect not only the forex markets but also major commodities markets. The rate decisions of Bank of England and European Central Bank could affect the British pound and Euro, respectively. There are expectations that ECB will cut the rate by 25pp to 0.5%. In such a case it could lower the Euro and consequently adversely affect the prices of gold and silver rates. The speculations around the future steps of ECB’s bond purchase program that will help struggling EU countries could also help rally the Euro and bullion rates. Today’s U.S publications including ISM non-manufacturing PMI and jobless claims might have a modest effect on the USD.  Finally, if the Euro and other “risk currencies” will rise during the day they could pressure up precious metals prices.