The prices gold and silver continued their rally and rose for the second consecutive business day. There were several news items that were released yesterday regarding Australia:  RBA kept the interest rate unchanged at 3.5%; the Australian GDP fro Q2 expanded by 0.6% (seasonally adjusted)  which is lower rate than in the first quarter (back then it was 1.3%). Currently gold and silver prices are falling. The U.S manufacturing PMI edged down 49.6%, which means the manufacturing sector is still contracting. On today’s agenda: German 10 Year Bond Auction, Bank of Canada’s Overnight Rate, and Australia Employment Report.

Here is a short outlook for precious metals for Wednesday, September 5th: 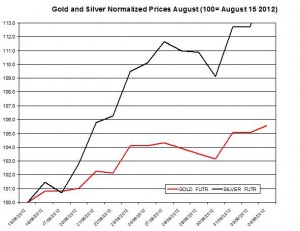 The ratio between the two precious metals declined again on Tuesday to 52.33. During August-September the ratio declined by 9.5% as silver out-performed gold. 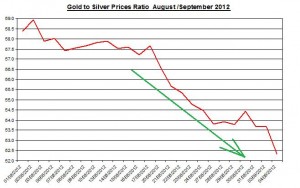 German 10 Year Bond Auction: the German government will issue its first bond auction for September; in the previous bond auction, which was held at the beginning of August, the average yield reached 1.42%;

Australia Employment Report: in the recent report regarding July 2012 the rate of unemployment remained at 5.2%; the number of employed (seasonally adjusted) increased by 14k; the number of unemployed fell by 2.5k during July compared to June. This report may affect the Aussie dollar, which is strongly correlated with bullion rates;

The Euro/ USD declined on Tuesday by 0.21% to 1.2566. During last month the Euro/USD rose by 2.24%. Further, other currencies including Aussie dollar depreciated on Tuesday against the USD by 0.21%. The linear correlation between gold and Euro is still strong and positive: during August-September, the correlation between the gold and EURO/USD was 0.49 (daily percent changes). Therefore, if the Euro will continue to fall against the USD, it could also curb the rally of precious metals. Currently, the Euro/USD is trading down.

Current Gold and Silver Rates as of September 5th

Precious metals traded up in the past couple of business days despite the deprecation of the Euro and Aussie dollar and the decline of major commodities and stock markets. This rally might change direction today if other commodities, stock and “risk currencies” will continue to trade down. The renewed speculations around the future steps of the Fed regarding its quantitative easing plan will keep the rates of precious metals high. The speculations around the future steps of its bond purchase program that will help struggling countries such as Spain and Italy could also keep the Euro and bullion high. Today’s items of the Australian employment report, German auction and BOC rate decision might have a modest effect on the Aussie dollar, USD, and Canadian dollar,  respectively.  In such a case, these currencies could also affect the direction of gold and silver. If BOC will change its interest rate it could also affect the Canadian dollar which is strongly correlated with bullion. Finally, if the Euro and other “risk currencies” will fall during the day they could curb the rally of precious metals prices.