The prices of gold and silver continue to zigzag as both metals tumbled down. Other leading commodities prices such as crude oil and natural gas also fell yesterday. Will gold and silver further fall? The recent decision of RBA to cut its cash rate by 0.25pp to reach 3% is another step the central bank has taken to help recovery the Australian economy. On the other hand, Bank of Canada left its cash rate unchanged at 1%. Currently, the prices of gold and silver are rising. On today’s agenda: ADP estimate of U.S. non-farm payroll, U.S. ISM Non-Manufacturing PMI, Spanish 10 Year Bond Auction and Australia Employment Report.

Here is a short outlook for precious metals for Wednesday, December 5th:

In the chart below are the developments in the normalized prices of precious metals during November and December (normalized to 100 as of October 31st). During recent days the price of silver and gold declined. 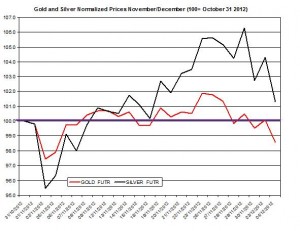 The ratio between the two precious metals rose on Tuesday to 51.76. During the week the ratio edged up by 0.46% as gold out-performed silver.

U.S. ISM Non-Manufacturing PMI: During October this index edged down to 54.2% – this means the non-manufacturing is growing and at a slightly slower rate than in the previous month; this index may affect forex and commodities;

Spanish 10 Year Bond Auction: the Spanish government will come out with its monthly bond auction; in the last bond auction, which was held during the third week of November, the average rate reached 5.52%;

Australia Employment Report: in the last report regarding October the rate of unemployment remained at 5.4%; the number of employed (seasonally adjusted) slightly rose by 10,700 people; the number of unemployed declined by 8,800 during October compared to September. This report could affect the Aussie dollar (see here the recent report);

The Euro/ USD increased again on Tuesday by 0.31% to 1.3094. During the week, the Euro/USD rose by 0.83%. Moreover, some currencies such as Aussie dollar also appreciated yesterday against the USD by 0.49%. As stated in the past, the correlations among gold, Euro and Aussie are still strong even thought they have recently weakened: during November and December, the linear correlation between gold and Euro /USD reached 0.42 (daily percent changes); the linear correlation between the silver and AUD /USD was 0.35 (daily percent changes). Thus, if the Euro and other risk currencies will rise again against the USD, they are likely to pull up gold and silver.

Current Gold and Silver Rates as of December 5th

The prices of gold and silver changed direction and tumbled down on Tuesday and thus resume their downward trend from last week. Today, however, precious metals prices might moderately rise as a correction for yesterday’s sharp fall. The ongoing concerns regarding the fiscal cliff are likely to contribute to the volatility of precious metals in the weeks to follow. The recent news regarding the negotiations between Congress and President Obama is that House Speaker wants a new offer from the President for the budget austerity plans. The upcoming reports including: U.S none-manufacturing PMI could moderately affect commodities markets. If the PMI will rise again it may pull up commodities prices. Australia’s employment report could affect not only the Aussie dollar but also precious metals prices. If this report will show the economy isn’t doing well, it could adversely Australia’s currency. This, in turn, could adversely affect precious metals. Finally, if the Euro and other “risk currencies” will rally against the USD, they are likely to pull up precious metals.