The much anticipated publication of the minutes of the recent FOMC meeting didn’t amount to more than a storm in a teacup: The minutes didn’t offer any additional insight about the Fed’s next move and the wording remained ambiguous. Basically, if the economic outlook will improve the FOMC will cut back on its asset purchase program. The September meeting might stir up the teapot as many anticipate it might be the one, in which the Fed will announce the tapering. Until then gold and silver investors will continue to mostly rely on the progress of the U.S economy. Yesterday, the U.S Existing Home Sales report came out: Sales spiked in July as the annual rate rose to 5.39 million – it was 5.06 million in June. This is positive news for the recovery of the U.S housing market. On today’s agenda: China flash Manufacturing PMI, Flash German, French and Euro Zone Manufacturing PMI, Canada Retails Sales, U.S. Jobless Claims and Jackson Hole Symposium.

Here is a short outlay for bullion for Thursday, August 22nd:

In the chart below are the normalized rates of precious metals for 2013 (normalized to 100 as of July 31st). The prices of gold and silver have bounced back in August. 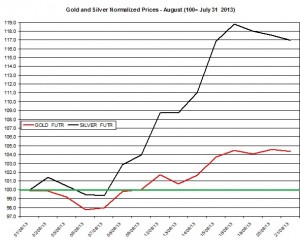 The ratio between the two precious metals slightly rose again on Wednesday to 59.66. During August, the ratio fell by 10.77% as silver has out-performed gold. 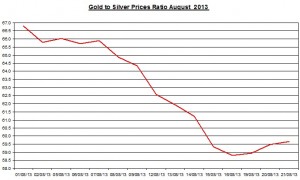 The gold and silver futures volumes of trade remained stable and reached on Wednesday 161 thousand and 62 thousand, respectively – relatively low levels compared to previous weeks. If the volume will rise, this could suggest the odds of sudden sharp movement in the prices of gold and silver due to high volume will increase. The chart below shows the changes in the volume of trade of silver and gold in recent weeks. 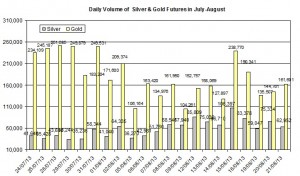 See here the weekly projection for gold and silver for August 19-23.

Flash German, French and Euro Zone Manufacturing PMI: In the previous monthly report regarding July 2013, the German PMI rose to 50.3 i.e. the manufacturing conditions are expanding after they had contracted a month earlier. This report serves as an indicator to the economic development of the Euro Area’s leading economies’ manufacturing conditions; this news, in turn, may affect the Euro/USD currency pair and consequently precious metals;

Canada Retails Sales: This report will pertain to the retails sales in Canada as of June. In the latest report regarding May 2013, retails sales rose by 1.2%;

U.S. Jobless Claims Weekly Report:  In the latest report the jobless claims fell by 15k to reach 335k; the next weekly report may affect the U.S dollar;

Jackson Hole Symposium: This will be a three day Symposium conducted by the Federal Reserve of Kansas City to be held in Jackson Hole Wyoming. The Symposium will be pertaining to the U.S monetary policy;

The Euro/ USD currency pair slightly fell on Wednesday by 0.46% to 1.3355. During the month so far, the Euro/USD slightly increased by 0.40%. Moreover, other currencies such as the Aussie dollar and Canadian dollar also depreciated yesterday against the U.S dollar by 1.15% and 0.79%, respectively. The correlations among gold, Euro and Aussie dollar have weakened, e.g. the correlation between the AUD/USD and gold price is 0.38 during July-August. If the correlations will continue to contract, this could suggest the effect the forex market has on precious metals market will diminish.