Gold and silver continued to trade down during most of last week. The high volatility in the commodities markets didn’t seem to coincide with the relatively low volatility in the forex markets. The major developments in the forex markets came from Japan when the BOJ announced it will aim to augment its monetary base within the next couple of years. This news spiraled down the Japanese yen against leading currencies including Euro and USD. In the U.S jobless claims increased by 28k to 385k; non-farm payroll report wasn’t positive as only 88k jobs were added during last month. This news may have contributed to the rally of precious metals on Friday. In Europe, ECB President left the rate unchanged but hinted he might cut the rate in the near future. During last week, gold and silver declined last week by 1.2% and 3.8%, respectively. Conversely, the Euro bounced back and rose by 1.37% against the USD. The Japanese yen depreciated against the USD by 3.6%.

Here is a short recap of the developments in precious metals prices between April 1st and April 5th: 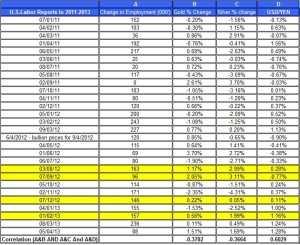 This news may have contributed to the rally of gold and silver on the last day of the week.

The chart below shows the developments of precious metals, as their rates are normalized to 100 as of March 28th. Gold and silver prices have had a sharp downward trend during most of last week.

The second chart shows the daily percent shifts of bullion rates (or in other words the changes around the trend). Silver and gold sharply fell during most of the week except on Friday. Precious metals prices daily percent shifts ranged between nearly 1.5% gain and 2.5% drop. 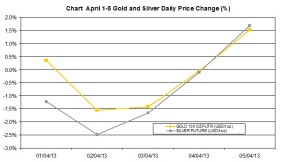