Gold and silver changed direction from their downward during the past couple of weeks and rallied during last week. Specifically, the price of gold rose by 4.18% and silver by almost 3.5%. Was this rally a correction to the sharp fall in the prices of gold and silver from the previous week or a shift in market sentiment? The last several U.S reports showed a mixed signal regarding the progress of the U.S economy: The core durable goods fell by 1.4% in the past month; new home sales slightly rose by 1.5%; the U.S GDP grew in the first quarter of 2013 by 2.5% – lower than the rate many economists had anticipated. This mixed signal may have contributed to the zigzag in the prices of gold and silver that changed direction almost on a daily basis during last week. Precious metals prices weren’t the only commodities that rose last week; the price of oil also rallied last week. The rally of commodities along with the weak performance in equities markets during last week might suggest that some investors have reinvested their funds in commodities. In any case, the high volatility in precious metals might continue, which means sharp changes in the prices of gold and silver. During last week, the yen and Canadian dollar rallied against the USD by 1.48% and 0.96%, respectively. Their recovery might have partly helped rally precious metals.

Here is a short recap of the developments in precious metals prices between April 22nd and April 26th:

The chart below presents the changes of precious metals, as their rates are normalized to 100 as of April 19th. Gold and silver prices sharply rose during most of the week. 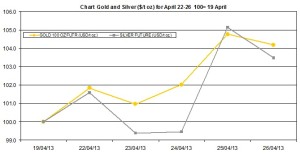 The second chart shows the daily percent shifts of bullion rates (or in other words the changes around the trend). Silver and gold rallied mainly on Monday and Thursday. Precious metals prices daily percent changes ranged between 5.7% gain and 2.2% drop. 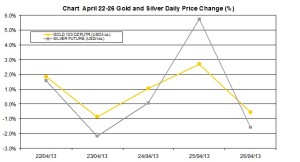