Gold and silver took another beating and had one of the worst performing weeks in recent years. As of April 12th, the price of gold plummeted by 5.9%, which makes April the worst performing month for gold (to date) since May 2012. Silver tumbled down by 6.9%, which is still a smaller rate of decline than it had back in February 2013 (back then silver fell by 9.4%). The publication of the minutes of the recent FOMC meeting may have rekindled the speculations that the FOMC will end its asset purchase program soon than expected. This news may have been the trigger for the sharp fall in the prices of gold and silver. By the end of the week, the retail sales report came out and showed that retail sales performed worse than many have anticipated. This news may have adversely affected not only commodities but also equity markets. In other news, U.S jobless claims decreased by 42k to 388k; PPI fell by 0.6% as of March. During last week, gold and silver plummeted last week by 4.73% and 3.27%, respectively. Conversely, the Euro rose again by 0.94% against the USD. The Aussie dollar also appreciated against the USD by 1.20%.

Here is a short recap of the developments in precious metals prices between April 8th and April 12th:

The chart below presents the developments of precious metals, as their rates are normalized to 100 as of April 5th. Gold and silver prices have had a sharp downward trend during the previous week. 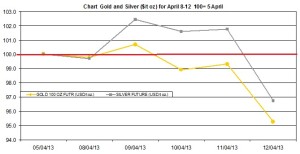 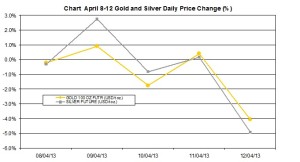