The precious metals market reheated as the prices of gold and silver rallied again for the second consecutive week. Their recent rise coincided with the ongoing depreciation of the USD against the Euro and Japanese yen. The main news item from last week was the non-farm payroll report that hit the expected figures as only 148k jobs added in September. Jobless claims slipped by 12k to 350k. In other news, Bank of Canada left its interest rate unchanged but came up with a dovish quarterly report regarding the future progress of the Canadian economy. Finally, China’s flash manufacturing PMI rose to 50.9 in October – a seven month high. This positive news may have also contributed to the rally of commodities prices. By the end of the week, gold price rose by 2.89% and silver by 3.32%.

Here is a short review of the latest changes in precious metals prices between October 21st and October 25th:

The chart below shows the shifts in precious metals rates, in which they are normalized to 100 as of October 18th. Gold and silver prices sharply rose during last week. 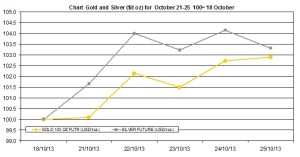 The second chart presents the daily percent changes of bullion prices (or in other words the changes around the trend). Silver and gold shifted from gains to losses during last week. On Tuesday and Thursday, both precious metals sharply rose, which gave them enough steam to pull these metals’ prices up. Gold and silver prices daily percent shifts ranged between 2.3% gain and 0.8% drop. 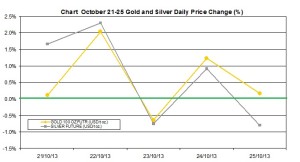