The precious metals market reheated as the prices of gold and silver bounced back form their recent descent. The government shutdown ended with a short term solution as the budget talks will continue with a revised deadline of the middle of January; the debt ceiling was also pushed up but will only last until the beginning of February. These recent events depreciated the USD against leading currencies such as Aussie dollar and Euro and may have also contributed to the rally of gold and silver prices. These latest developments may have closed the door on the Fed tapering QE3 in the near future. In other news, the GDP of China grew by 7.8%, which is slightly higher than the previous quarters. This news may have also contributed to the recovery of commodities prices. In the U.S the Philly fed index for October slipped from 22.3 to 19.8; the jobless claims fell by 15k to 358k. By the end of the week, gold rose by 3.64% and silver by 3.07%.

Here is a short review of the latest developments in bullion prices between October 14th and October 18th:

The chart below shows the changes in precious metals prices, in which they are normalized to 100 as of October 11th. Gold and silver prices didn’t do much during the week except on Thursday. 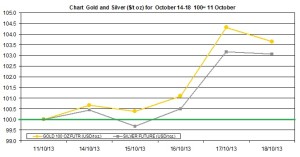 The second chart shows the daily percent shifts of precious metals prices (or in other words the changes around the trend). Silver and gold mostly remained flat during last week. On Thursday, both precious metals sharply rose by over 2.5% each. Gold and silver prices daily percent changes ranged between 3.2% gain and 0.8% decline. 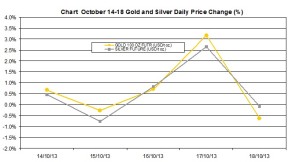