The price of gold slipped during the previous week by 0.69% while silver bounced back and rose by 1.59%. The market still waits for the FOMC’s next meeting, which will take place in less than two weeks. Even if the Fed decides to taper QE3, which is likely to come down to a $15 billion a month reduction in the monthly purchase program, i.e. from $85 billion to $70 billion, the effect on precious metals might not be too robust: Considering the little positive effect QE3 had on precious metals in the past year, the negative effect might not be too severe over long period of time. Until then, the progress of U.S economy will continue to influence bullion investors regarding how they perceive the Fed’s next move will be.  Last week, the non-farm payroll report showed a rise of 169k in jobs – a bit lower than anticipated. This may have contributed to the rally of gold and silver on Friday. The U.S manufacturing PMI inched up to 55.7 in August – this means, the manufacturing sectors in the U.S are expanding at a faster pace; jobless claims decreased by 9k to reach 323k.  The ECB and RBA left their respective policy unchanged. Nonetheless, the Aussie dollar sharply rose against the USD on the positive economic data including the sharp rise in GDP.

Here is a short review of the latest developments in precious metals prices between September 2nd and September 6th:

The chart below presents the developments in precious metals rates, in which they are normalized to 100 as of August 30th. Gold slightly fell while silver prices rallied during the week. 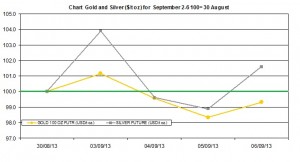 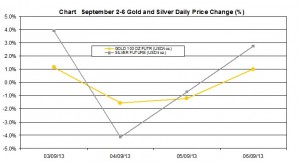 Do Gold and Silver protect you from Inflation?