The bullion market shifted direction again as both gold and silver resumed their downward trend that started last week. Both precious metals slightly declined yesterday along with other commodities such as oil and leading “risk related currencies” such as Euro and Aussie dollar against the USD. Main updates from yesterday: Bank of Canada left its short term interest rate unchanged. Japan’s trade balance (pdf file) for March, in which the deficit declined by 15.2% due to the decline in imports and rise in exports. Will gold and silver continue to fall? Currently, gold and silver prices are rising. On today’s agenda: Spanish 10 Year Bond Auction, U.S. Jobless Claims, Philly Fed Manufacturing Index, BOC Gov Carney Speaks, G20 Meeting.

Here is a short outlook for precious metals for Thursday, April 18th:

The speculations continue regarding the cause for the sharp fall in precious metals prices: Some suggested it was due to the speculations around Cyprus’s central bank might be forced to sell its gold holdings; others suggested the Fed and BOJ asset purchase programs led to the collapse of gold prices. I think this whole notion of trying to find a cause where there might not be any is something that could lead to creative ideas; ideas that won’t necessarily explain the phenomena. I think the writing was on the wall all a long that gold will tumble down and there was a tipping point that led to this sharp fall. I think it was just a matter of time so the surprise for me wasn’t the why but the when. This is the issue with bubbles you never know when only in hindsight. 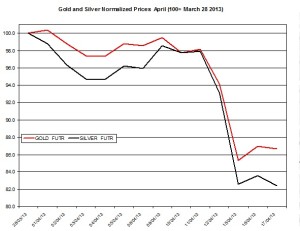 The ratio between the two precious metals increased again on Wednesday to 59.30. During April the ratio rose by 5.21% as gold out-performed silver. 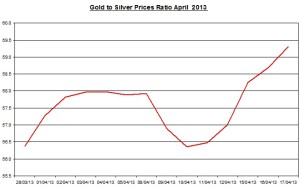 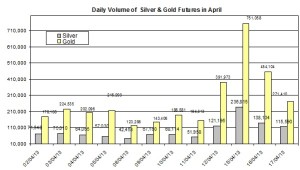 U.S. Jobless Claims: in the latest report the jobless claims declined by 42k to reach 388k; this upcoming weekly update may affect the U.S dollar and consequently precious metals;

Philly Fed Manufacturing Index: In the previous March survey, the growth rate changed course and rose from -12.5 in February to 2.0 in March (the previous Philly Fed review);

Spanish 10 Year Bond Auction: Spain will issue its monthly with bond auction; in the recent bond auction, which was held at the beginning of April, the average rate reached 4.48% – the lowest rate in recent months;

BOC Gov Carney Speaks: Carney will give a speech at the Thomson Reuters on-stage interview, in WashingtonDC. His speech might affect the Canadian dollar if his speech will provide a surprising headline;

All Day – G20 Meeting: The leading ministers of finance will convene for a two day meeting. The meeting might affect the financial markets if there will be big headlines coming out of this summit;

The Euro/ USD also fell on Wednesday by 1.09% to 1.3033. During April, the Euro/USD rose by 1.69%. Moreover, other currencies such as the Aussie dollar and Canadian dollar also depreciated yesterday against the U.S dollar by 0.91% and 0.55%, respectively. The tumble of leading currencies against the U.S dollar may have had little to do with the decline of gold and silver. The correlations among gold, Euro and Aussie dollar strengthened for April: the linear correlation between gold and Euro/USD was 0.55 (daily percent changes); the linear correlation between the gold and AUD/USD recent 0.69 (daily percent changes). These correlations suggest the recent decline of precious metals rates was slightly related to the developments in the foreign exchange markets. The chart below shows the linear correlations among precious metals prices and leading currencies pairs during April. 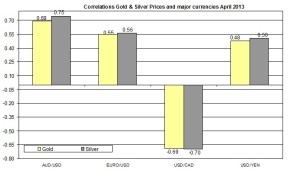 Current Gold and Silver Rates as of April 18th

← Gold Silver and Aussie Dollar Declined on Wednesday – Recap April 17th
Is the Golden Era of Gold Over? →