The prices of gold and silver resumed their upward trend at the end of last week following the FOMC meeting. The FOMC’s statement had a general dovish overtone; Chair Yellen also kept the tight lid on the Fed’s future plans and dismissed the rise in core CPI to 2% as noise. Further, the FOMC, as expected, revised down its economic guidance. All these factors combined were enough to rally gold and silver. Will precious metals keep recovering? This week, several key economic reports will be released including home sales figures, GDP for Q1 (final estimate), PCE, core durable goods, consumer sentient and consumer confidence.  So let’s break down the economic calendar for the week of June 23rd to June 27th. 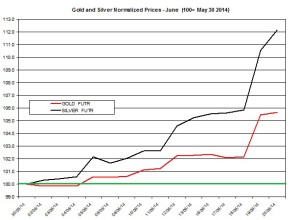 As you can see, the prices of precious metals (normalized to the end of last month) picked up the in the past few weeks. Moreover, the recent spike prices also resulted in a rise in volume of trade as indicated in the chart below. 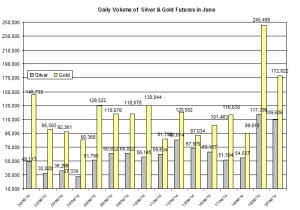 Moving towards this week, the aftermath of the FOMC meeting could have some modest lingering effects on precious metals and the USD. Below you can find a review for the main decisions, reports and events that will come to fruition during June 23-27 and may stir up gold and silver prices.

Let’s start with the U.S:

The recent FOMC meeting seems to have a positive impact on the prices of gold and silver for the first time in a while.

The table below shows the reactions to past FOMC decisions.

In the previous five meetings the prices of gold and silver fell the day after the release of the FOMC’s decision. This time, the expected tapering of QE3, which was widely expected, didn’t adversely affected gold and silver prices. But the revised down economic outlook and dovish tone of the press release and press conference by Yellen were enough to rally gold and silver.

The FOMC meeting and the press conference showed the U.S economy might not be picking up as many had assumed it is. Yellen also referred to PCE as the estimate the FOMC reviews more closely than the CPI. This week, the PCE will be released. If the core PCE (excluding food and energy) picks up as the core CPI did, this could be a positive sign towards the progress of the U.S economy and might influence FOMC members to reconsider changing to a more hawkish tone. If PCE keeping slowly picking up at a 0.1%-0.2% pace, this could be enough to keep pulling up the prices of gold and silver: Since the FOMC isn’t likely to change its dovish tone; the current low interest rates will be enough to slowly pull up bullion rates.

The GDP estimate for Q1 2014 will be released this week. If the growth rate would be revised down again (the last estimate puts the GDP at a -1% contraction rate, which led to the revised down figures of the FOMC’s GDP growth rate for 2014), this could steer investors towards the yellow metal.

Besides the PCE report and latest GDP estimate, several other economic reports will be published including: New and existing home sales, core durable goods, consumer sentiment, and consumer confidence. If these reports show the U.S economy isn’t progressing, this could also benefit the bullion market.

During last week, the US dollar slightly depreciated against the Euro and Canadian. Nonetheless, the correlations among gold, silver and leading currencies pairs remain weak. Thus, the recent fall in value of the U.S dollar didn’t have much of an impact on gold and silver.

This week, several reports will be released including: EU manufacturing PMI, German business climate, Great Britain current account, and Germany CPI could affect the British pound and Euro. Since these currencies have kept having a weak relation with the prices of bullion during the past couple of months, they aren’t likely to have a strong effect on gold and silver.

During the previous week, the Indian Rupee dropped again against the US dollar. If the rupee depreciates further, it could soften the demand for the yellow metal in India.

Finally, during last week, gold holdings of SPDR gold trust ETF slipped by 0.57%. The ETF is still down by 2.32% since the beginning 2014. Gold holdings were at 782.62 tons by the end of the previous week. If the ETF’s gold holdings keep falling, this may signal the demand for gold as an investment is softening.

The recent shift in the bullion market may have partly been driven by the FOMC’s latest statement and Yellen’s press conference. If the U.S economy keeps showing little progress and the core PCE remains low (well below an annual rate of 2%) this could be enough to keep slowly pushing up the prices of gold and silver.

← Financial Market Forecast for June 23-27
Is the Silver Market Heating Up? →