Gold and silver prices slipped during last week. The latest economic reports about the U.S and China may have contributed to the recent developments in the precious metals market: U.S new home sales jumped by 9.6%; pending home sales index inched up by 0.1% to 95 during January. Consumer confidence rose from 77.3 to 81.7; the U.S GDP growth rate for the fourth quarter dropped to 2.4%. Finally, jobless clams rose by 14k to reach 348k. In China, the PMI for February declined to 50.2 – the manufacturing sectors are growing as a slower pace. In the forex market, the Euro, Canadian dollar, and Japanese yen slightly rose against the USD, while the Aussie dollar moderately depreciated. This mixed trend may have contributed to the modest fall of gold and silver. For the week of March 3rd to 7th, several reports and events will be released such as: U.S non-farm payroll report, ECB rate decision, China’s manufacturing PMI, Australia’s GDP for the fourth quarter, U.S trade balance, U.S ISM manufacturing and non-manufacturing PMI, and U.S factory orders.

Herein is a short overview showing the main decisions, reports and events that will unfold during March 3rd to 7th and may affect precious metals prices.

This week, several reports will be released including: non-farm payroll report, trade balance, manufacturing PMI, non-manufacturing PMI, factory orders and jobless claims. If these reports show little progresses in the U.S economy, they could pull back up the prices of precious metals.

Specifically, the non-farm payroll report tends to have a strong correlation with precious metals prices. 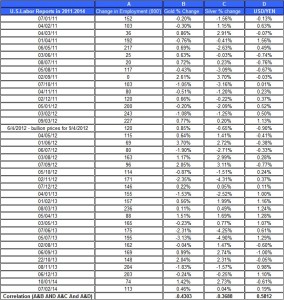 The table above shows the reactions of the prices of gold and silver to previous U.SNF payroll reports.

The US dollar depreciated again against the Euro and Japanese yen, which may have also curbed down the decline of precious metals. Conversely, the Aussie dollar slipped against the USD. Thus, if the U.S dollar continues to weaken against the Euro; this could moderately pull up the prices of gold and silver. The correlation among AUD/USD, Euro/USD and precious metals have strengthened in the past couple of months;

The chart below shows the linear correlation among leading currencies pairs and precious metals prices. 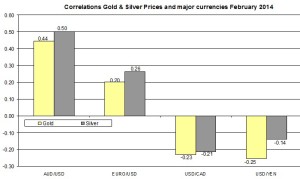 This week, the ECB will decide on its interest rate. This decision could affect the Euro. Some suspect the ECB could cut down again its cash deposit rate again. Several reports will be released including: German factory orders, German industrial production, EU retail sales, and Spain’s unemployment rate. These reports could affect the Euro/USD, which could play a secondary role in the progress of the prices of gold and silver.

During last week, the Indian Rupee slightly appreciated against the US dollar. If this trend continues, it could positively affect the demand for precious metals in India.

In China, the manufacturing PMI (final estimate of HSBC) report will come out. If the Chinese economy continues to slow down, this might imply the demand for commodities in this country is falling, which could also curb the recent recovery of precious metals.

Finally, during last week, gold holdings of SPDR gold trust ETF changed direction and rose by 0.68%. The ETF is up by nearly 0.31% since the beginning of the year (UTD). Gold holdings were at 803.704 tons by the end of last week. If the ETF’s gold holdings continue to pick up, this may signal the demand for gold as an investment is improving.

The progress of the U.S economy especially in labor and manufacturing sectors might affect the direction of precious metals. If the U.S labor market slowdown again and NF payroll report shows growth of less than 100k, this could pull up gold and silver. The recent modest recovery of the U.S stocks markets and the appreciation of the USD against the Aussie dollar may have pressured down the demand for investments such as gold and silver. Moreover, if China’s economy slows down, it could suggest the demand for commodities such as gold in China will diminish. Conversely, the recovery in the demand for precious metals for investment purposes as indicated in the rise in gold holdings in the GLD gold holdings might pull back up prices of gold and silver. These opposite forces could suggest that gold and silver move in a mixed trend in the near future. Therefore, I remain neutral on gold and silver for this week.