The highly anticipated FOMC meeting concluded not with a bang – raising rates – but with whimper – keeping us guessing when the next rate hike will occur. In the statement and in Chair Yellen’s press conference it was clearly noted that a rate hike this year is still on the table. Moreover, three other Fed officials also voiced their opinion on Saturday for raising rates this year. As we progress closer to the end of the year, the pressure on the FOMC members to raise rates is likely to intensify, which could increase the possibility of rate hike this year. I still think, the Fed won’t raise rates this year as I pointed out in a recent article. In any case, as expected, precious metals prices rallied. And since the FOMC’s decision will keep echoing in the markets in the near term, bullion prices could still be affected by the recent decision.

This week, ECB President Draghi and FOMC Chair Yellen will give a speech. Other events on this week’s agenda include: U.S. GDP for Q2 (final estimate), the Greek elections results, U.S. durable goods, and China’s manufacturing PMI. Let’s review the latest developments related to gold and silver what’s next for the week of September 21-25:

The Fed’s decision to keep rates low and even voice their concern over the global economic climate was considered by many as a dovish statement. And from the perspective of gold and silver, we do see a market’s reaction similar to a dovish tone. But this assessment should have an asterisk: after all, in the foreign exchange rate markets, the U.S. dollar didn’t move much against leading currencies except for a short fall again Euro – the USD depreciated by 1.3% on the day of the statement’s release only to rally back 1.2% the next day. 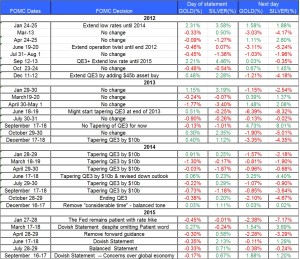 Following this decision the implied probabilities for a rate hike dropped for the next two meetings in October and December to 11% and 39%, respectively.

For a more detailed explanation for the FOMC’s statement, see here.

Looking forward, Yellen’s speech could move the bullion market – especially if she were to refer to what’s up ahead for the Fed. The title of her speech is: Inflation Dynamics and Monetary Policy.

In the coming days the markets are likely to keep digesting the recent FOMC decision and its interpretation in light of the new economic data. On notable report is the GDP for Q2, final estimate. In the previous estimate, the GDP growth rate was 3.7%, which was well above expectations. Another stronger than expected growth rate could further suggest the U.S. economy is improving and could increase the odds of the possible rate hike this year.

Another report to consider is China’s Caixin Flash Manufacturing PMI: after all, the Fed’s concern is mostly related to China. And for silver, the physical demand is mostly connected to the progress of China’s economy. Last time, the Caixin PMI remained low at 47.1; this time, the expectations are for the PMI to inch up to 47.6 – still means manufacturing sectors are contracting. If the PMI doesn’t start to pick up again to pass the 50 mark, it could suggest China’s economy isn’t doing well – this is a good sign for keeping Fed’s rates low, but a bad sign for the physical demand of silver; my guess is that a decline in the manufacturing PMI could have positive impact on gold and negative on silver.

Despite the recent rally in the prices of gold and silver, the demand for ETFs didn’t seem to pick up: By the end of last week, gold holding of the gold ETF SPDR Gold Trust (GLD) fell to 678.2 tons of gold – 0.65% drop since the beginning of the month. And silver holdings for the silver ETF iShares Silver Trust (SLV) declined by 1.5% to 320.9 million ounces during September.

The upcoming major reports from EU, China and U.S. could indicators for what the market expects the Fed will do in the next two meetings. The shift in market sentiment, at least in the bullion market, may not last long, but could continue in the coming days as the FOMC decision keeps echoing in the markets. The Greek elections results (we need to say something about it, no?!) could also intensify again the unrest in the markets – if the results surprise (Syriza doesn’t win or the Greek ends up with an unstable coalition), which plays in favor for precious metals.