Precious metals much like many other commodities and currencies pairs haven’t done much yesterday as both gold and silver slightly declined. Other currencies including the Aussie dollar and Canadian dollar also slightly fell against the USD. Yesterday, U.S housing data came out: housing starts rose by 6.8% in May; building permits slipped by 3.1% during last month. The U.S CPI monthly update also came out yesterday and showed a 0.1% gain in CPI and 0.2% gain in core CPI. These little movements in both inflation and housing may have led to slow day in forex and commodities markets. Moreover, the rally in the equity market in the U.S may have also pulled down investors from precious metals and into equities. The main even of the week will unfold today as the Fed will announce of any changes to its asset purchase program. Update: the Fed left policy unchanged but Bernanke stated that if economic conditions will continue to improve the Fed may taper QE3 by year end.   Besides the FOMC statement, on today’s agenda: Minutes of MPC Meeting, German 10 Year Bond Auction, Governor Poloz speaks and China flash Manufacturing PMI.

Here is a short outlook for precious metals for Wednesday, June 19th: 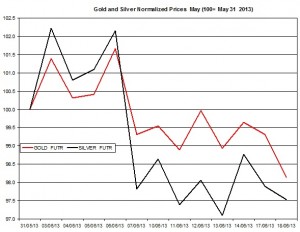 The ratio between the two precious metals slipped on Tuesday to 63.05. During June, the ratio rose by 0.63% as gold has slightly out-performed silver. 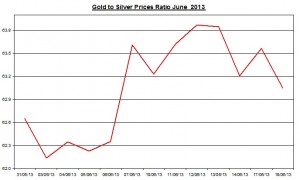 FOMC Meeting and Forecast: In the last meeting the FOMC kept its policy unchanged. The table below shows the reaction of precious metals in the two days following the previous FOMC meetings in 2012 and 2013. Moreover, Bernanke’s testimony didn’t offer any big headlines, even though he did suggest that tapering the current asset purchase program isn’t off the table and could happen in the near future. Considering the inflation is still very low, the unemployment is still well above the Fed’s goal of 6.5% and economic growth isn’t stable, I suspect the Fed won’t change its policy this time. If the Fed will surprise and change or even hint of future change to its asset purchase program; this could rally the USD and consequently pressure down gold and silver.

Minutes of MPC Meeting: in the latest MPC meeting, the Bank left the rate unchanged at 0.5% and the asset purchase program at £375 billion; the MPC still shows concerns regarding the progress of the UK economy. The minutes of last week’s meeting might offer some perspective regarding the bank’s future monetary policy;

German 10 Year Bond Auction: the German government will have its monthly bond auction; in the last bond auction, which was held at the middle of May, the average rate reached 1.28% – its lowest level this year (UTD);

The Euro/ USD slightly rose again on Tuesday by 0.19% to 1.3392. During June, the Euro/USD increased by 3.02%. Conversely, other currencies such as the Aussie dollar depreciated yesterday against the U.S dollar by 0.61%. The correlations among gold, Euro and Aussie dollar weakened in recent weeks. If these correlations will continue to weakened, the movement of the Aussie, Euro and Japanese yen are likely to have a lesser effect on precious metals rates.

← Do Gold and Silver Protect you from Inflation?
Fed may scale down QE3 by the end of the year →