The prices gold and silver didn’t do much again on Wednesday despite the publication of the German court ruling on EMS that approved the bailout. The next step will be to wait for Spain to officially request a bailout. Currently the prices of gold and silver are slipping. On today’s agenda: statement of the FOMC Meeting (UPDATE: FOMC announced of QE3), Swiss National Bank rate decision, SNB Press Conference, U.S. Jobless Claims Weekly Update, U.S. Producer Price Index, Italian 10 Year Bond Auction  and GB 10 Year Bond Auction.

Here is a short outlook for precious metals for Thursday, September 13th:

As seen below, the chart shows the shifts of normalized prices of precious metals in the past couple of weeks (normalized to 100 as of August 31st). During the month, gold and silver have traded slightly up. 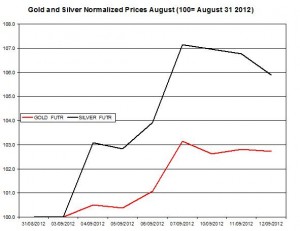 The ratio between the two precious metals rose on Wednesday to 52.08. During September the ratio declined by 2.98% as gold slightly under-performed silver. 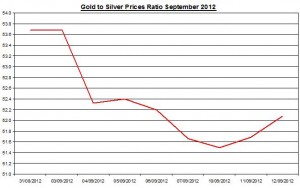 Statement of FOMC Meeting: Following the speech of Bernanke and the minutes of recent FOMC meeting, it seems that the market has already concluded that there will be another QE program in the near future. Further, the recent depreciation of the USD, the low growth rate in employment and GDP for Q2 are also adding to the chances of another QE. I think the FOMC won’t announce of another stimulus plan in this upcoming meeting. I speculate that even if the FOMC won’t announce of another QE program but will only allude to its intention to do so in the near future, this news is likely to further pull up precious metals;

U.S. Producer Price Index: In the recent report regarding July this index for finished goods rose by 0.3% compared with June’s rate and increased by 0.5% in the last 12 months; this news might affect bullion;

U.S. Jobless Claims Weekly Update:  in the recent report the jobless claims declined by 12k to 365,000; this upcoming weekly update may affect the U.S dollar and consequently the rates of commodities;

SNB Press Conference: soon after the publication of the rate decision and monetary policy statement the Swiss National Bank Chairman will hold a press conference;

Italian 10 Year Bond Auction: the Italian government will issue another bond auction; in the latent bond auction, which was held at the end of August, the average rate reached 5.82%;

GB 10 Year Bond Auction: the British government will also issue a bond auction; in the recent bond auction, which was held at the middle of July, the average rate was 1.72%;

ECB Monthly Bulletin: This monthly report for August 2012 analyzes the economic changes of the Euro Area including price stability, interest rate decisions and government’s debt; this report might provide some insight into the updated expectations of the Euro Area growth;

The Euro/ USD rose on Wednesday by 0.35% to 1.29. During the month, the Euro/USD rose by 2.55%. Further, other currencies including Aussie dollar also appreciated on Wednesday against the USD by 0.32%. The linear correlation between precious metals and Euro is still strong and positive: during August/September, the linear correlation between the gold and EURO/USD reached 0.56 (daily percent changes). The recent German Court Ruling didn’t catch many by surprise and thus had a modest effect on the Euro. If the Euro will change direction, especially if the FOMC won’t come up with the news that many anticipate, this could pull down the prices of precious metals. Currently, the Euro/USD is trading down.

Current Gold and Silver Rates as of September 13th

Today’s publication of U.S reports including jobless claims and PPI might have some effect on the USD and bullion as indicated above. The prices of bullion didn’t do much again but this might change today as the FOMC meeting will be concluded today and will reveal its decision. The market has already risen in the past couple of weeks – following the publication of the previous FOMC meeting, Bernanke’s speech at Jackson Hole and the lower than expected U.S non-farm payroll report – mainly the prices of gold and silver. A major contributor to the rally is the speculation around QE3. I have examined the relation between the speculations between QE3 news and the price of gold.  Nonetheless, I still guess the FOMC won’t reveal QE3 just yet. If the statement will allude to the fact, however it could keep bullion rates up mainly if Bernanke will offer some insight other than the usual “keeping all options on the table” speech. Otherwise there could be a sharp market reaction that will drag down not only the Euro/USD but also bullion rates. There are other monetary policies the Fed might try such as pledging to keep long term yields ( ten years and more) below a certain percent –say for 10 year bonds, pledge to keep yields below 2.5% – or raising the inflation target to 3%-4%. These options might also affect bullion rates. But it’s not clear how they will affect precious metals compared to QE3. After all, Bernanke’s operation twist (raising the maturity of debt and pulling down long term yields) didn’t seem to affect much bullion. The pledge of the Fed to keep rates low until late 2013 and then until late 2014 seem to have a strong effect on the bullion market but also not as QE1 and QE2 had on precious metals.

Finally, today’s Swiss National Bank rate decision could affect the Franc if there will be a rate reduction.