Following the tumble in the prices of gold and silver during June, both precious metals bounced back last month. Moreover, their rally coincided with the recovery of leading currencies such as Euro and Japanese yen against the US dollar. Many investors still wait for the FOMC decision in September regarding whether the Fed will taper QE3. In last FOMC meeting, no change to policy was made. Until September and volatility of precious metals might remain low as it did during July and the speculations around the Fed’s next move will remain high. Will precious metals benefit from these circumstances and extend their rally for the second month in a row? Let’s breakdown the upcoming events and reports that may relate to the precious metals market and will unfold during August; let’s also provide a short analysis for July.

Gold and silver prices bounced back during July. Their rally coincided with the recovery of the Euro and Japanese yen against the USD. The recent FOMC meeting didn’t stir up the precious metals market and bullion traders remain poised for the September FOMC meeting that could be the one, in which the Fed will announce of tapering QE3. By the end of the month, gold rose by 7.24% (as of July 31st); silver, by 0.91%. For gold this was the best performing month this year. For silver, this was the best performing month since January 2013. Let’s divide July into two sections: the table below divides the month at July 10th; I divide the month to demonstrate the change in pace of gold and silver prices; during the first part of July, gold rose by 1.9%; silver fell by 1.5%. During the second part of July, however, silver rallied by 2.5%; gold price rallied by 5.2%. 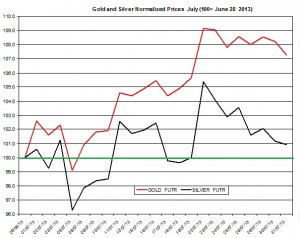 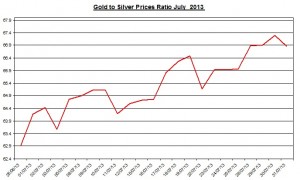 Here are several factors that may have adversely affected gold and silver prices during the month:

Here are several factors that may have positively affected gold and silver during the month:

1 comment for “Gold and Silver Prices Outlook for August 2013”