Gold and silver prices sharply rose yesterday following the decision of the FOMC ot keep its policy unchanged without tapering its asset purchase program. The progress of the U.S economy will continue to affect FOMC members and whether there will be tapering in the near future. In the meantime, in the U.S jobless claims rose by 15k to reach 309k; existing home sales spiked by 6.5% to reach an annual rate of 5.39 million in July; Philly Fed index sharply rose in September from 9.3 to 22.3 – this signal the U.S manufacturing conditions are  progressing at the faster pace. This news may curb the recent rally of gold and silver during today’s trading. On today’s agenda: Bank of Japan’s Kuroda Speaks and Canada’s core CPI.

Here is a short overview for bullion for Friday, September 20th: 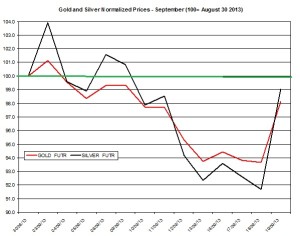 The ratio between the two precious metals fell on Thursday to 58.91. During September, the ratio decreased by 0.92% as silver has slightly out-performed gold. 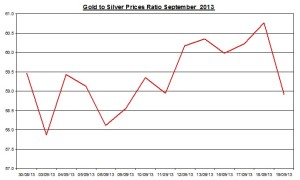 The FOMC concluded its two day meeting with the decision to keep its $85 billion a month asset purchase program unchanged. This means, the FOMC won’t start tapering this month. This news is likely to pull down the USD and pressure back up gold and silver prices.

This decision has positively affected prices of gold and silver as indicated in the table below.

Bank of Japan’s Kuroda Speaks: Bank of Japan Governor will speak at the Kisaragi-kai meeting, in Tokyo. Kuroda’s words could influence traders especially considering the recent weakening of Japanese yen in recent weeks;

Canada‘s core CPI: This report pertains to the CPI and core consumer price index (controlling the volatile components such as energy, fruit and vegetables) for August 2013. According to the latest Canadian CPI report for July, the core CPI remained unchanged. This report might affect the Canadian dollar, which is also strongly correlated with precious metals;

On Thursday, the Euro/ USD currency pair slightly increased by 0.07% to 1.353. During the month, so far, the Euro/USD rallied by 2.33%. Conversely, other currencies such as the Aussie dollar and Canadian dollar depreciated yesterday against the U.S dollar by 0.86% and 0.44%, respectively. The correlations among gold, Euro and Aussie dollar have weakened in the past couple of months, e.g. the correlation between the Euro/USD and gold price is 0.23 during August-September.