The prices of gold and silver bounced back during last week. The weakness in the equities markets and recent depreciation of the US dollar against the Japanese yen and Euro may have contributed to the rally of precious metals. The U.S economic reports may have affected the direction of precious metals: retail sales inched up by 0.3% to reach $427.2 billion; the producer price index fell by 0.3% but the PPI sans energy and food rose by 0.2%; the federal budget deficit grew by 193 billion during February; finally, jobless clams declined by 9k to reach 315k. For the week of March 17th to 21st, several reports and events will be released such as: FOMC meeting and press conference, U.S CPI, German ZEW economic sentiment, U.S housing data, Philly Fed Manufacturing Index, Canada’s retail sales, and jobless claims.

Herein is a short overview showing the main decisions, reports and publications that will unfold during March 17th to 21st and may affect precious metals prices.

The upcoming FOMC could affect the prices of gold and silver at least for the short term. Last time, the FOMC decided to taper QE3 by $10 billion. This decision resulted in a decline in precious metals prices.

The table below presents the reaction of gold and silver to the FOMC’s decisions in the past several years. 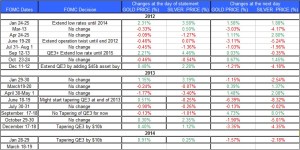 The upcoming decision will accompany an economic outlook update and press conference, which could result in a stronger effect on the financial markets.

From the perspective of the progress of the U.S economy, the labor market showed signs of improvement in the past month, which might be enough for the FOMC to reduce again its QE3 program by another $10 billion. If the Fed tapers again QE3, it is might pull up USD and pressure down (for a short period) gold and silver prices. If the FOMC hints it may push back the rate hike, this could also have a negative effect on precious metals.

Keep in mind, however, that the FOMC might come up with additional monetary measures to kick-start the economy. After all, the GDP growth rate isn’t high, the labor market is still not doing well, the inflation is still very low, and the housing market is slowing down.

Besides the FOMC decision and press conference, several reports will be published this week including: Housing starts, existing home sales, Philly fed index, industrial production, TIC long term purchases and jobless claims. If these reports show progresses in the U.S economy, they could curb the recent recovery of precious metals.

This week, several reports and event will come to fruition including: EU economic summit, CPI, German ZEW economic sentiment, MPC asset purchase and rate votes, and EU current account. These reports and events could affect the Euro/USD, which could play a secondary role in the changes of the prices of gold and silver.

During last week, the Indian Rupee slightly depreciated against the US dollar. If this trend persists, it could adversely affect the demand for precious metals in India.

In China, last week several reports were released such as new loans and industrial production. They weren’t too positive and suggested China’s economy isn’t progressing as fast as it did in the past. China is among the leading precious metals importer worldwide, and if its economy doesn’t progress, it could imply the demand for precious metals in China will diminish.

Finally, during last week, gold holdings of SPDR gold trust ETF increased again for the third consecutive week, this time by 1.41%. The ETF is up by nearly 2% since the beginning of the year (UTD). Gold holdings were at 816.593 tons by the end of last week – the highest level since mid-December 2013. If the ETF’s gold holdings continue to rally, this may signal the demand for gold as an investment is strengthening.

Last week’s rally of gold and silver may change course this week. This shift in trend could occur especially, if the upcoming U.S reports show signs of progress; and if the FOMC decides to taper again QE3. If the FOMC Chair Yellen talks in the press conference about the possibility of raising the cash rate in the next six months, this could have a longer adverse effect on gold and silver. Moreover, the rally of the USD against the Aussie dollar and Canadian dollar may have curbed down the recovery of gold and silver and could continue to do so in the coming week. Conversely, the recent decline of the U.S stocks markets and the depreciation of the USD against the Euro and Japanese yen may have pressured up the demand for investments such as gold and silver. Finally, the rise in demand for precious metals, as indicated by the higher gold holdings in GLD, suggests more investors believe in the recovery of gold. Therefore, I think gold and silver might change course and fall for this week.