Gold and silver prices continued their fall and declined for the second consecutive day following their sharp rise on Monday. In Europe flash manufacturing PMI indexes rose during July: EU PMI rose to 50.4 (in June it was 48.7); Germany’s PMI rose to 52.8 (50.4 in June) – this means Germany’s manufacturing sectors are growing at a faster pace. This positive news weren’t enough to pull up the Euro. The sharp drop in the Aussie dollar and Japanese yen may have contributed to the decline in commodities prices. In the U.S, new home sales rose by 8.3% during June compared to May and by 38.1% compared to June 2012. This positive news of the growing of housing market may have pressured down precious metals.  Will gold and silver prices pull up today? On today’s agenda: Spain’s unemployment Change, German Ifo Business Climate Index, Euro Area Monetary Development, Flash GB GDP Q2 2013, U.S Core Durable Goods, and U.S. Jobless Claims.

Here is a short outlook for precious metals for Thursday, July 25th:

In the chart below are the normalized rates of silver and gold for 2013 (normalized to 100 as of June 28th). The rates of gold and silver have slipped in recent days. 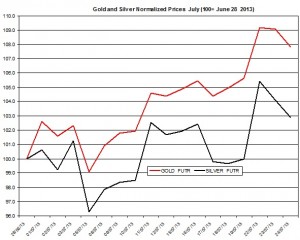 The ratio between the two precious metals inched up on Wednesday to 65.93. During July, the ratio rose by 4.79% as gold out-performed silver. 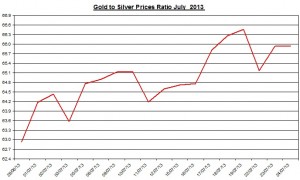 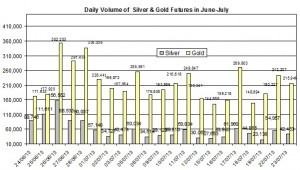 See here the weekly forecast for gold and silver for July 22-26.

U.S Core Durable Goods: This monthly report may indirectly indicate the changes in U.S. demand for commodities such as oil and gas. As of May 2013, new orders of manufactured durable goods increased to $231 billion; if this report will show another rise in new orders then it could pull commodities prices;

U.S. Jobless Claims:  in the latest report the jobless claims declined by 24k to reach 334k; the next weekly report may affect precious metals prices;

Spain‘s unemployment Change: the rate of unemployment of the Spain rose again to 27.2%. This mean, the employment situation in Spain hasn’t improved. If in the upcoming report this trend will persist, it may adversely affect the Euro;

German Ifo Business Climate Index: In the recent report for June 2013, the business climate index rose from 105.7 in May to 105.9 in June; if this trend will continue, it might pull up the Euro;

Flash GB GDP Q2 2013: This report will present the first estimate of the quarterly growth rate of the British economy for the second quarter of 2013; during the first quarter the GB economy expanded by 0.3% (Q-2-Q);  if the growth rate will rise, it could affect the monetary policy of Bank of England and also affect GB pound;

The Euro/ USD currency pair slightly fell on Wednesday by 0.17% to 1.3201. During July, the Euro/USD increased by 1.47%. Moreover, other currencies such as the Aussie dollar and Japanese yen also changed direction and sharply depreciated yesterday against the U.S dollar by 1.44% and 0.84%, respectively. These changes may have contributed to the recent drop in commodities prices. Moreover, if this trend will persist, it may further pull down gold and silver rates.

Current Gold and Silver Rates as of July 25th

← Gold and Silver Prices – Daily Outlook for July 24
Is China about to hit the Great Wall? →