Following a slow week, the precious metals market reheated as both gold and silver spiked on the first business day of the week. Their rally wasn’t due to latest developments in the forex market although the US dollar did depreciate against leading currencies including Euro and Aussie dollar.  The recent U.S housing data weren’t too positive as existing home sales slipped by 1.2% in June to reach an annual rate of 5.08 million. In my view, this news wasn’t enough to pull up gold and silver prices. Perhaps we have witnessed another short squeeze that could explain this rapid spike in gold and silver prices.  If gold and silver will change direction today, this could suggest the short squeeze theory had some merit. On today’s agenda: Canada Retails Sales, Australia’s CPI for Q2 2013, and China flash Manufacturing PMI.

Here is a short outlook for precious metals for Tuesday, July 23rd: 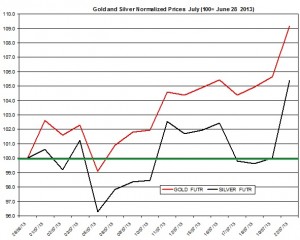 The ratio between the two precious metals slightly fell on Monday to 65.17. During July, the ratio rose by 3.59% as gold moderately out-performed silver. 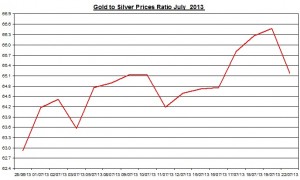 See here the weekly outlook of gold and silver for July 22-26.

The gold and silver futures volumes of trade have reached on Friday to 180 thousand and 23 thousand, respectively. These numbers are lower than the volume traded during the month. Conversely, the week started with high volumes of trade. If the volume will continue to rise in the coming days, this could pressure up the volatility of precious metals prices. The chart below shows the volume of trading gold and silver futures in the CME during the past several weeks. 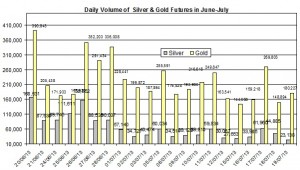 Australia’s CPI for Q2 2013: In the previous report regarding the first quarter of 2013, the CPI rose by 0.4% compared to the fourth quarter and by 2.5% compared to Q1 2012; this report could affect the Aussie dollar which is linked with commodities rates;

China flash Manufacturing PMI: this index is based on a survey covering 800 companies in 20 industries in China; in the previous HSBC Manufacturing PMI survey regarding June 2013 the Manufacturing PMI declined again to 48.3; this index indicates China’s manufacturing sectors have contracted at a slightly faster pace than in May; if the index will continue to contract, this may adversely affect precious metals prices;

The Euro/ USD currency pair rallied again on Monday by 0.33% to 1.3186. During July, the Euro/USD rose by 1.35%. Moreover, other currencies such as the Aussie dollar and Japanese yen sharply appreciated yesterday against the U.S dollar by 0.84% and 0.97%, respectively. The correlations among gold, Euro and Aussie dollar remained robust, e.g. the correlation between the Euro/USD and gold price is 0.59 in recent weeks.  If these correlations will remain strong, the currencies pairs Aussie/USD, Euro/USD and Canadian dollar/USD are likely to affect precious metals prices. 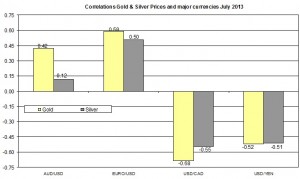 Current Gold and Silver Rates as of July 23rd