The prices of gold and silver rose again for the second consecutive day. Will this upward trend continue today? The minutes of the last FOMC meeting will come out and could stir up the precious metals markets if the minutes will offer some additional insight behind the future plans of the Fed. Bernanke will also give a speech that might also affect the financial markets. Besides these events, on today’s agenda: Japan’s monetary policy meeting minutes, China’s Trade Balance, French Industrial Production, U.S 10 Year Bond Auction.

Here is a short outlook for bullion for Wednesday, July 10th:

The ratio between the two precious metals slightly rose again on Tuesday to 65.13. During July, the ratio rose by 3.52% as gold slightly out-performed silver. 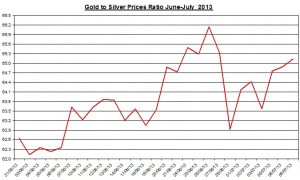 See here the weekly breakdown of gold and silver for July 8-12.

The high movement of gold rate is represented in the slight in its volatility during July. On the other hand, silver’s volatility slightly slipped: the standard deviations of gold and silver (daily percent changes) reached 2.08% and 2.56%, respectively. 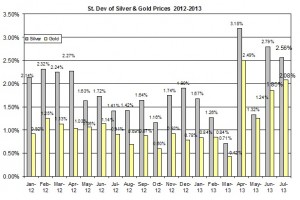 Minutes of FOMC Meeting: Following the last FOMC meeting, in which the Fed left its monetary policy unchanged but Bernanke heavily hinted that the Fed may start taper the asset purchase program by the end of 2013; the upcoming minutes could offer some additional light behind the future plans of the Fed. If the minutes will further suggest the Fed is considering easing down the current asset purchase program in the coming months, this could pull down precious metals prices;

China’s Trade Balance: According to the latest monthly report, China’s trade balance rose to a $20.4 billion surplus; if the surplus will further rise, it could indicate that China’s economic growth is picking up and thus may positively affect precious metals;

French Industrial Production: This upcoming report will pertain to June’s figures. In the latest update, the industrial production changed direction and rose by 2.2% during May;

U.S 10 Year Bond Auction: the U.S government will come out with its monthly bond auction; in the previous auction, which was held at the second week of June, the average rate reached 2.21% – much higher than the last auction;

The Euro/ USD changed direction and fell on Tuesday by 0.69% to 1.2781. During July, the Euro/USD declined by 1.76%. On the other hand, other currencies such as the Aussie dollar slightly appreciated again yesterday against the U.S dollar by 0.46%. The correlations among gold, Euro and Aussie dollar strengthened in recent weeks, e.g. the relation between the Euro/USD and gold price is 0.47 during June and July. The table below shows the correlations among precious metals and leading currency pairs. 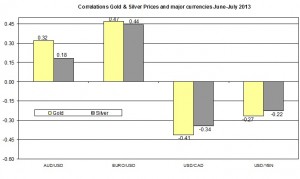 Current Gold and Silver Rates as of July 10th

← Will Natural Gas Resume its Downward Trend?
The FOMC minutes is pulling up gold and silver →