The prices gold and silver didn’t do much as the market waits for the two main events of the week regarding the German court ruling on EMS and tomorrow’s publication of the FOMC statement.  In regards to the court ruling, many anticipate that the high courts will approve the bailout.  Yesterday, the American trade balance report came out, both exports and imports declined during July which points to a slowdown in the U.S economy. Currently the prices of gold and silver are rising. On today’s agenda: Euro Area Industrial Production, German High Court Ruling on EMS and U.S 10 Year Bond Auction.

Here is a short outlook for precious metals for Wednesday, September 12th:

As seen below, the chart shows the changes of normalized prices of precious metals in the past couple of weeks (normalized to 100 as of August 31st). During the month, gold and silver have traded up. 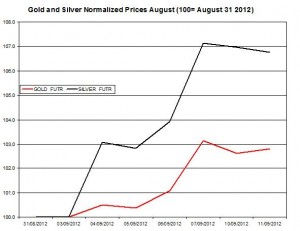 The ratio between the two precious metals rose on Tuesday to 51.69. During September the ratio declined by 3.7% as gold slightly under-performed silver. 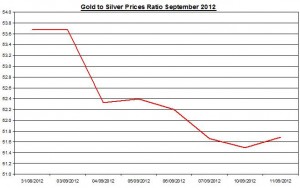 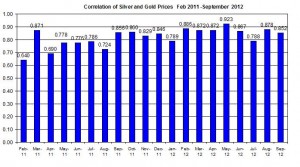 German High Court Ruling on EMS: The German Court will publish its final ruling on the legality of the Euro bailout fund, European Stability Mechanism (EMS). If the Court will rule in favor of the program it could help stabilize the Euro;

U.S 10 Year Bond Auction: the U.S government will issue another bond auction; in the recent bond auction, which was held at the second week of August, the average rate reached 1.68%;

The Euro/ USD hiked on Tuesday by 0.75% to 1.2855. During September, the Euro/USD rose by 2.2%. Further, other currencies including Aussie dollar and Canadian dollar also appreciated on Tuesday against the USD by 0.99% and 0.47%, respectively. The linear correlation between precious metals and Euro is still positive: during August/September, the linear correlation between the gold and EURO/USD reached 0.57 (daily percent changes). If the Euro will continue to trade up, especially if the German Court ruling will approve the EMS, it could help rally the prices of precious metals. Currently, the Euro/USD is trading up.

Current Gold and Silver Rates as of September 12th

The prices of bullion didn’t do much yesterday while other major currencies pairs such as Euro/USD traded sharply up. I suspect the volatility will pick up during the day as forex and commodities traders are waiting for the German court ruling statement. Assuming there won’t be surprises, this decision is likely to pull up the Euro and consequently gold and silver prices will follow. Today’s publication of the Euro Area industrial production might have some effect on the Euro. If this report will show little progress it could pull down precious metals prices. Today the FOMC will commence its two day meetings, and tomorrow the FOMC will publish its decision – whether there will be another QE program. My guess is that the FOMC won’t announce just yet of QE3 even though the market already expects that. Even if there won’t be a decision on QE3 only another strong hint for a near future decision to implement QE3, bullion may also rise. I have examined the relation between the speculations between QE3 news and the price of gold.