Precious metals prices zigzagged throughout the week with an unclear trend despite the deprecation of the Euro and other “risk currencies” during last week. There were several reports that were published during the previous week: the U.S GDP growth rate was revised down to 1.3%; U.S new home sales declined in August by 0.3%; U.S consumer confidence index rallied in September; U.S jobless claims declined by 26k to 359k. This mixed signal regarding the development of the U.S economy may have contributed to the unclear trend in major commodities markets. In Europe, the recent developments in Greece, Spain and Italy that included riots against austerity measures may have helped drag down not only bullion rates but also the Euro. By the end of the week, the release of Spain’s budget for 2013, which introduced, according to the Spanish government, austerity measures that are with accordance to the EU guidelines, may have contributed to the rally of the Euro and precious metals rates.

Nonetheless, during the week the Euro/USD decreased by 0.94%; further, other “risk currencies” also depreciated against the USD, e.g the Aussie dollar fell by 0.74%.

Here is a short recap of the changes in Bullion between September 24th and September 28th:

During the previous week, the average daily percent change of gold reached -0.04%; silver edged down by an average 0.03%.

As seen below, the chart shows the developments of precious metals, as their rates normalized to 100 to September 21st. Bullion prices zigzagged throughout the week. 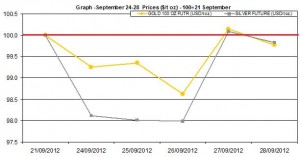 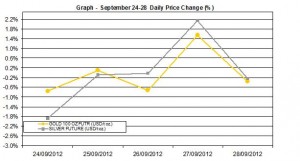