Precious metals markets continued to show weakness and both gold and silver were traded down again during last week. Their fall coincided with the decline of leading currencies against the USD. All eyes are towards the next FOMC meeting that will be held at the end of July especially following the recent FOMC meeting, in which it was hinted the Fed may taper QE3 in the coming months. The ongoing signs of recovery of the U.S economy are raising the odds of the Fed tapering its asset purchase program in the near future. U.S new home sales increased during May; durable goods report showed that during last month new orders of manufactured durable goods rose by $8.0 billion or 3.6% during May to reach $231.0 billion; consumer confidence report showed another rise in consumer confidence index as of June. The index increased to 81.4 (1985=100). In other news: Jobless claims declined by 9k to reach 346k. On the other hand, U.S GDP growth rate for the first quarter was revised down to 1.8%.

Here is a short analysis of the developments in precious metals prices between June 24th and June 28th:

During the previous week, the average daily percent shifts of gold reached -1.063%; silver had an average daily change of -0.463%.

The chart below presents the changes in bullion rates, in which their prices are normalized to 100 as of June 21st. Gold and silver prices sharply declined during most of the week. 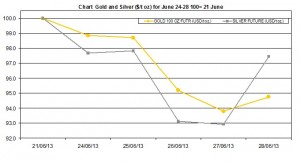 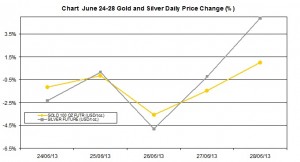