Gold and silver changed direction and decreased during last week. In the forex market, the U.S dollar appreciated against many currencies such as Euro, Japanese Yen, and Canadian dollar. This shift may have contributed to decline of precious metals. The FOMC Chair Janet Yellen gave a speech regarding the Federal Reserve policy and reassured people that the Fed will maintain the low rate even if the U.S economy reaches the FOMC’s targets about inflation and labor (low unemployment and target inflation). This speech wasn’t enough to pull back up the prices of gold and silver. The weakness of China may have also contributed to the decline of precious metals as China’s GDP slowed down in the first quarter and reached an annual growth of 7.4%. Moreover, during last week, several U.S reports were released and were mostly positive: The housing starts rose by 2.8% during March to reach 946 thousand; Philly fed index rose from 9 in March to 16.6 in April; retail sales increased by 1.1% during March; the CPI slightly rose by 0.2% to an annual rate of 1.5%; the core CPI inched up by 0.2% to an annual pace of 1.7%, which is still below the Fed’s target inflation;  jobless clams inched up by 2k to reach 304k. By the end of the week, gold price rose by 1.2% and silver remained flat.

Here is a short review of the recent changes in precious metals prices between April 14th and April 18th:

The chart below presents theshifts inprecious metals prices, in which they are normalized to 100 as of April 11th. Gold and silver dropped mainly on Tuesday. 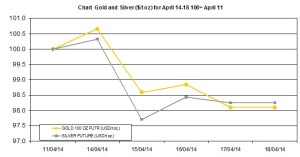 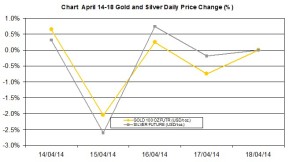 ← How Will the Brent-WTI Spread Impact Oil Refiners?
Financial Market Forecast for April 21-25 →