Gold and silver kept their stagnation as prices didn’t move much on a weekly scale. The recent release of the minutes of the FOMC didn’t stir up the markets as FOMC members didn’t change by much their economic outlook or offer any additional changes to the Fed’s monetary policy. Several U.S reports were released in the past week, which were mostly positive including: new home sales grew by 6.4% in April compared to March; existing home sales also rose by 1.3% to a seasonally adjusted annual rate of 4.65 million in April; jobless clams changed direction and increased by 28k to reach 326k. Finally, China’s manufacturing PMI slightly recovered to 49.7 – the highest level in 5-months, but this means the PMI is lower than 50. These recent news items may have slightly appreciated the U.S dollar against currencies such as Euro, Yen and Aussie dollar. Despite these developments, gold and silver remained flat. By the end of the week, gold price inched down by 0.13%; silver slightly increased by 0.44%.

Here is a short overview of the recent developments in precious metals prices between May 19th and May 23rd:

The chart below shows thechanges inprecious metals prices, in which they are normalized to 100 as of May 16th. Gold and silver slowly rallied during most of last week. 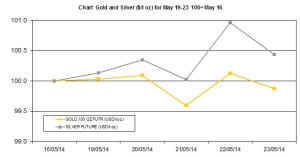 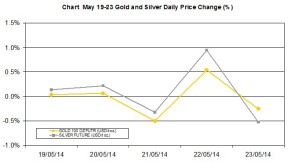 ← Choosing a Silver Company
Financial Market Forecast for May 26-30 →