Gold and silver resumed their downward trend during last week. The recent testimony of FOMC Chair Yellen, in which she reiterated her view that the U.S economy is on the right track towards improvement, may have dragged down the prices of gold and silver. Further, jobless clams dropped by 26k to reach 319k as of last week. This may have strengthened the U.S dollar and thus adversely affected the precious metals prices. Conversely, the recent JOLTS report, which shows the change in number of non-farm employment opening during March, wasn’t positive as job opening reached 4 million – slightly lower than market expectations. Finally, the ECB left its rate unchanged but ECB President Draghi stated the bank could start a monetary easing policy in June. The details aren’t clear how will this new policy affect the EU and the Euro. In any case, this news slightly pulled up the U.S dollar against the Euro. By the end of the week, gold price dropped by 1.17%; silver, by 2.17%.

Here is a short review of the latest developments in precious metals prices between May 5th and May 9th:

The chart below shows thechanges inprecious metals prices, in which they are normalized to 100 as of May 2nd. Gold and silver declined during most of last week. 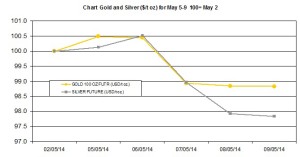 The second chart shows the daily percent changes of precious metals prices(or in other words the changes around the trend). Silver and gold dropped mainly on Wednesday to Thursday, and remained nearly flat during the rest of the week. The daily percent shifts ranged between -1.5% and 0.5%. 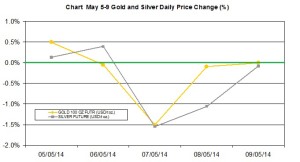 ← Will Silver Wheaton Corp Reach its Quarterly Goals?
Oil Outlook for May 12-16 →