The gold and silver market moved in an unclear direction during the week. Nonetheless, their prices ended the week higher than last week’s on account of their sharp rise on Thursday. Despite the holiday season, several U.S reports were released: manufacturing PMI slipped to 57 – the manufacturing sectors are still expanding but at a slightly slower pace; jobless claims declined by 2k to 339k; consumer confidence bounced back in November to 78.1; pending home sales edged up in November. In China, manufacturing PMI slipped to 50.5 in December, which means the manufacturing sectors are growing at a slightly slower pace. These reports were mixed but mostly showed little to no progress in these two major economies. Thus, they may have partly contributed to the rally of gold and silver. By the end of the week, gold price rose by 1.06% and silver by 2.02%.

Here is a short overview of the latest changes in precious metals prices between December 30th and January 3rd:

The chart below shows the developments in precious metals prices, in which they are normalized to 100 as of December 27th. Gold and silver have risen by the end of the week. 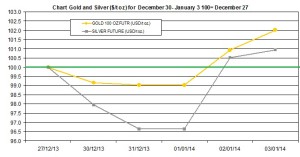 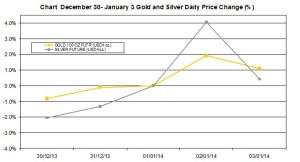