Gold and silver market continues to slowly recover as their prices rose again during last week. The economic slowdown in the U.S economy may have contributed to the rally of precious metals: retail sales declined by 0.4% during January; industrial production decreased by 0.3% in January. Finally, jobless clams rose by 8k to reach 339k. The new Chair of the FOMC – Janet Yellen testified in the House of Representatives and Senate. She pointed out that if the U.S economy slows down, it could lead the FOMC to implement additional monetary measures, but for now it seems that the FOMC will keep slowly reducing its asset purchase program.  In the forex market, the Euro, Aussie dollar and Japanese yen rallied against the USD. This may have also helped pull up commodities prices.  By the end of the week, gold price increased by 4.4% and silver by 7.45%.

Here is a short overview of the latest developments in precious metals prices between February 10th and February 14th:

The chart below shows the changes in precious metals prices, in which they are normalized to 100 as of February 7th. Gold and silver have rallied during last week. 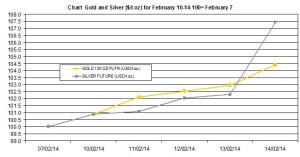 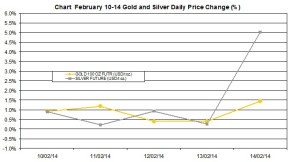 ← Is This Gold Producer a Buy?
Financial Market Forecast for February 17-21 →