Gold and silver market changed course as their prices slipped during last week. Despite their decline on a weekly scale they started off the week on a positive note only to tumble down at the end of the week. The recent reports regarding the U.S and China may have contributed to the mixed trend in pace in precious metals: in the housing market several reports showed growth including new home sales increased by 9.6%; pending home sales index inched up by 0.1% to 95 during January. Consumer confidence rose from 77.3 to 81.7. The U.S GDP growth rate for the fourth quarter declined to a 2.4% gain. Finally, jobless clams rose by 14k to reach 348k. In China, the PMI for February declined to 50.2 – the manufacturing sectors are growing as a slower pace. This news may have pressured down commodities prices including gold and silver. In the forex market, the Euro Canadian dollar, and Japanese yen slightly rose against the USD, while the Aussie dollar moderately depreciated. This mixed trend may have contributed to the modest drop in the prices of gold and silver. By the end of the week, gold price inched down by 0.16% and silver by 2.57%.

Here is a short overview of the latest changes in precious metals prices between February 24th and February 28th:

The chart below shows the shifts in precious metals prices, in which they are normalized to 100 as of February 21st. Gold and silver have declined during last week. 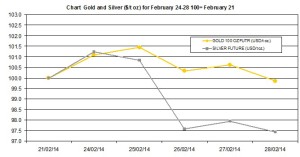 The second chart presents the daily percent shifts of precious metals prices (or in other words the changes around the trend). Silver and gold fell mainly on Wednesday. The daily percent changes ranged between -3.23% and 1.23%. 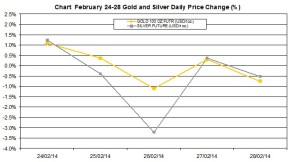