The prices of precious metals continued to seek direction as both gold and silver moved in an unclear trend during the week. Both precious metals slightly declined on a weekly scale. The ECB and MPC left their respective interest rates and monetary policy unchanged.  In the press conference that followed the rate announcement, ECB President referred to the strength of the Euro and the expected fall in the inflation and the recovery of EU during 2013. These comments raised the speculations around Euro and resulted in the depreciation of the Euro on Thursday and Friday. The shifts in the forex markets may have also affected the path of bullion rates. By the end of the week, the Euro/USD fell by 2.02%; the Canadian dollar also depreciated by 0.55% against the USD; the Aussie dollar depreciated against the USD by 0.85%. The U.S jobless claims changed direction again and declined by 5k to reach 366k. This news may have also helped rally the USD. By the end of the week, gold slipped by 0.22%; silver, by 1.62%.

Here is a short recap of the changes in precious metals prices between February 4th and February 8th:

The chart below presents the changes of precious metals, as their prices are normalized to 100 as of February 1st. Bullion prices have an unclear trend during the previous week. 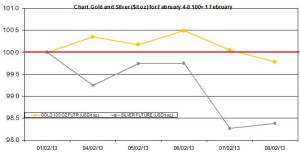 The second chart presents the daily percent shifts of precious metals (or in other words the changes around the trend). Silver and gold had shifted from gains to losses during last week. Precious metals rates daily percent changes ranged between nearly 0.5% gain and a 1.5% loss. 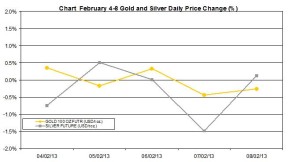 What Could Impede This Gold Company?

Is the Big Gold Rally Behind Us?

Why Isn’t Gold Pulling Up?

Gold and Silver Outlook for February

Gold and Silver Yearly Outlook For 2013