Gold and silver slowed down and slipped during last week mainly on Thursday following the recent FOMC’s decision to cut down again its asset purchase program by an additional $10 billion to $65 billion a month. This mini-taper was expected and yet it still dragged down the prices of gold and silver. Moreover, the U.S economy continues to show slow progress: the GDP for the fourth quarter grew by 3.2% – a slower pace than the third quarter, but still a good result. Conversely, jobless clams rose by 19k to reach 348k. By the end of the week, gold price fell by 2% and silver by 3.2%.

Here is a short overview of the recent changes in precious metals prices between January 27th and January 31st:

The chart below presents the changes in precious metals prices, in which they are normalized to 100 as of January 24th. Gold and silver have slowly descended during last week. 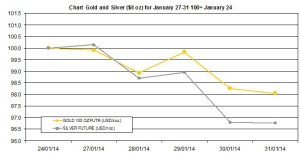 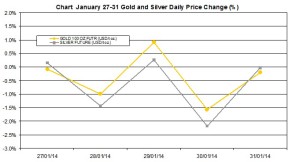