Gold and silver didn’t do much again during last week as gold slightly rose while silver edged down on a weekly scale. Their price volatility remained low despite sharp movement in the foreign exchange markets during last week. In the U.S several reports came out and some showed signs of growth in the economy: during February, retail sales rose by 1.1%; jobless claims fell again by 10k to reach 332k; the PPI and CPI each increased by 0.7% during last month.  On the other hand, the UoM consumer sentiment fell to 71.8 in March. During last week, the Euro/USD currencies pair rose; other leading currencies also such as the Aussie dollar and Yen also appreciated against the USD. This rally of the leading currencies against the USD didn’t seem to affect the direction of precious metals. By the end of the week, the Euro/USD rose by 0.55%; the Aussie dollar appreciated by 1.96% against the USD. Finally, gold rose by 1%; silver inched down by 0.34%.

Here is a short recap of the changes in precious metals prices between March 11th and March 15th:

The chart below presents the developments of precious metals, as their rates are normalized to 100 as of March 8th. Gold and silver prices have had an unclear trend during last week. 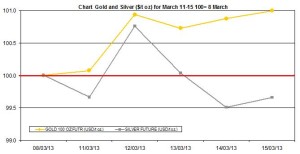 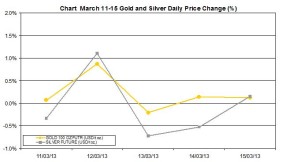