Despite the less than impressive financial news regarding the progress of the U.S economy that came out during last week the equity market continued to rally, while gold and silver prices declined. Last week, the U.S retail sales inched up by 0.1% during April. On the other hand, Philly Fed index decline in May; housing starts sharply fell by 16.5% in April; jobless claims sharply increased by 32k to reach 360k; the PPI fell again by 0.7% during last month.  In the currencies markets, during the previous week, the Euro and Aussie dollar tumbled down against the USD by 1.15% and 2.94%, respectively. Their sharp fall might have partly contributed to the plunge in precious metals prices.

Here is a short recap of the developments in precious metals prices between May 13th and May 17th:

The chart below presents the changes of precious metals, as their rates are normalized to 100 as of May 10th. Gold and silver prices sharply declined during last week. 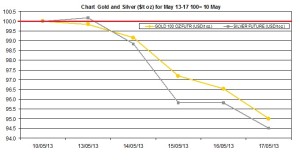 The second chart presents the daily percent shifts of bullion prices (or in other words the changes around the trend). Silver and gold declined during the week. Precious metals prices daily percent changes ranged between 0.16% gain and 3.05% drop. 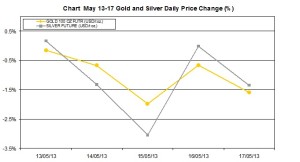