The prices of gold and silver continue to seek direction and they moved from gains to losses throughout last week: Despite the unclear trend the sharp fall in bullion prices on Friday led gold and silver to decline by 1.88% and 1.46%, respectively, on a weekly scale. The main event of last week was the Reserve Bank of Australia to cut it cash rate by 0.25pp to 2.75%. This news may have contributed to the fall of the Aussie dollar, which dragged along with it commodities prices. Bernanke gave a speech on Friday in which he warned about the potential peril the shadow banking system is facing. In the U.S, jobless claims slightly declined by 4k to reach 323k. In the currencies markets, during last week, the Euro and Aussie dollar sharply fell against the USD by 0.95% and 2.85%, respectively. Their decline might have partly pulled down precious metals.

Here is a short recap of the developments in precious metals prices between May 6th and May 10:

During the previous week, the average daily percent shifts of gold reached -0.371%; silver had an average daily change of -0.293%.

The chart below presents the shifts of precious metals, as their rates are normalized to 100 as of May 3rd. Gold and silver prices moved in an unclear trend during the week. 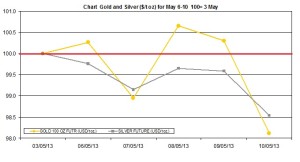 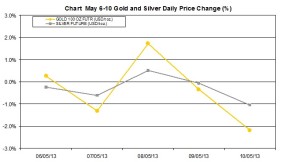