The precious metals market continues to cool down and both gold and silver plummeted during the week to their lowest level in months. In the forex market several currencies such as Japanese yen and Aussie dollar depreciated against the US dollar. The main report from last week related to precious metals market is the minutes of the FOMC meeting. The minutes revealed that FOMC Members are concerned of conveying to the public that slowly tapering QE3 (if and when it starts) isn’t linked with its cash rate decision. The cash rate is likely to remain at its lowest level until the unemployment rate falls below 6-6.5%, the two-year inflation expectations remain up to 2.5% annual rate, and longer-term inflation expectations continue to be well anchored. The minutes news may have contributed to the drop in gold and silver prices during the week. In the U.S several reports were released: the CPI fell by 0.1% drop last month and the core CPI inched up by 0.1% – the annual rate remained only 1.7%; existing home sales declined during October; retail sales in October slightly rose by 0.4%; the Philly fed index fell during November from 19.8 to 6.5. Conversely, jobless claims declined by 21k to 323k.  These reports suggest little progress in the U.S economy. Finally, China’s flash manufacturing PMI fell to 50.4 – the manufacturing sectors are growing at a slower pace. By the end of the week, gold price declined by 3.36% and silver fell by 4.17%.

Here is a short overview of the recent developments in precious metals prices between November 18th and November 22nd:

The chart below presents the shifts in precious metals prices, in which they are normalized to 100 as of November 15th. Gold and silver had a downward trend during the past week. 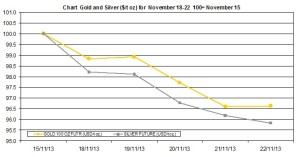 The second chart shows the daily percent changes of precious metals prices (or in other words the changes around the trend). Silver and gold declined mostly of the week. Gold and silver prices remained nearly flat on Tuesday only to resume their downward trend in the following days. The daily percent shifts ranged between 0.1% gain and 1.8% drop. 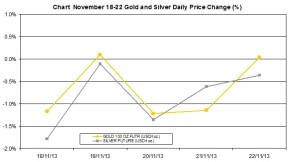