The bullion market didn’t do much during last week, after silver and gold rallied for three consecutive weeks. Despite their slow movement, both gold and silver ended the week with modest gains. The main news from last week was the drop in the U.S GDP growth rate to a 2.9 contraction rate. This development may have contributed to the rally of bullion and decline of USD.  Despite this negative news, other economic reports were mostly positive regarding the progress of the U.S economy: core PCE grew again by 0.2%, month over month; new home sales increased by 18.6% during May; existing home sales also rallied last month; consumer confidence index rose to 85.2 in June; jobless claims slightly fell by 2K to 312K. Alas, these news items didn’t seem to pull up the USD, as it depreciated against leading currencies. By the end of the week, gold rose by 0.29% and silver by 0.75%.

Here is a short overview for the week of June 23rd to 27th:

The chart below presented theshifts inprecious metals prices, in which they are normalized to 100 as of June 20th. Gold and silver slightly rose last week. 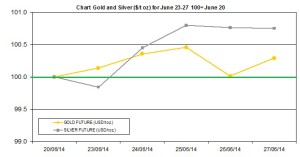 The second chart shows the daily percent developments of precious metals prices(or in other words the changes around the trend). Silver and gold rallied mainly on Tuesday. The daily percent shifts ranged between 0.61% and -0.44%. 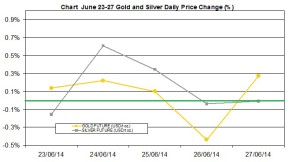 ← Is the Gold Market Heating Up?
Financial Market Forecast for June 30- July 4 →