Gold and silver moved in an unclear trend and slightly rose last week. In the forex market, the U.S dollar also slightly depreciated against the Euro and Japanese Yen. This modest depreciation of the US dollar may have contributed to modest gain of precious metals. In the U.S most of the economic reports painted a picture, in which the U.S economy hasn’t progress: New home sales dropped by 14.5% and reached 384k in March; existing home sales remained soft during March – the annual sales rate slipped by 0.2% to 4.59 million; jobless clams rose by 24k to reach 329k as of last week. These disappointing reports may have slightly weakened the US dollar and pulled up the prices of precious metals. Moreover, in China, HSBC’s estimate is that manufacturing PMI slightly rose 48.3 in April – the manufacturing sectors are still contracting but at a slower pace. If China’s economy keeps contracting this could suggest the country’s precious metals imports may fall. By the end of the week, gold price slightly rose by 0.5% and silver by 0.48%.

Here is a short review of the latest developments in precious metals prices between April 21st and April 25th:

The chart below presents thechanges inprecious metals prices, in which they are normalized to 100 as of April 18th. Gold and silver started off the week falling only to rally during the second part of the week. 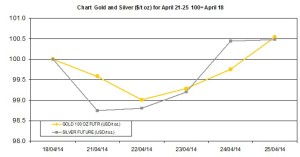 The second chart shows the daily percent changes of precious metals prices(or in other words the changes around the trend). Silver and gold slipped on Monday and Tuesday, and picked up on Wednesday and Thursday. The daily percent shifts ranged between -1.2% and 1.2%. 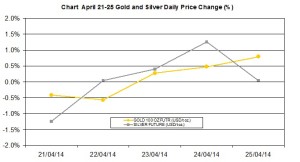