Gold and silver had a slow downward trend during most of the week only to bounce back on Friday following the release of the U.S non-farm payroll report. Gold ended the month modestly rising, while silver slipped. In the forex market, the U.S dollar slightly depreciated against the Euro and Canadian dollar. The FOMC decided earlier last week to taper again QE3 by another $10 billion to $45 billion a month. This news didn’t come as a surprise but was enough to drag further down the prices of gold and silver. The U.S GDP growth rate for the first quarter of 2014 was also released and showed a modest growth rate of only 0.1% – this news may have pulled down commodities prices. By the end of the week, the U.S NF payroll report released and showed a 288k gain in jobs; the unemployment dropped to 6.3%. But most of this fall is related to the fall in the participation rate. In any case, this news didn’t pull up the U.S equities; it only slightly pulled up the U.S dollar against the Euro and Canadian dollar. Further, jobless clams rose by 14k to reach 344k as of last week. Finally, gold price bounced back and offset its descent during Monday to Thursday.  By the end of the week, gold price inched up by 0.2%; silver dropped by 0.9%.

Here is a short review of the latest developments in precious metals prices between April 28th and May 2nd:

The chart below shows thechanges inprecious metals prices, in which they are normalized to 100 as of April 25th. Gold and silver declined during the first four day of the week only to bounce back on Friday. 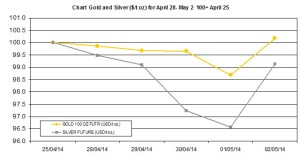