Gold and silver resumed their downward trend and slightly declined on a weekly scale. The high volatility in the forex market didn’t cross over to precious metals market that showed little movement in the prices of gold and silver in recent days. The latest developments, which stir up the Euro and other risk related currencies, from Cyprus were that uninsured deposits will suffer a haircut of 60%. Despite the high volatility in the forex markets, the Euro/USD also slightly declined during last week by 0.27%. Gold and silver also declined last week by 0.7% and 1.32%, respectively. The resolved bailout problem in Cyprus and the recent positive news regarding the steady recovery of the U.S economy may have contributed to the decline in demand of safe haven investments including gold and silver. Last week it was reported that the U.S GDP for the fourth quarter was slightly revised up from 0.1% to 0.4%. On the other hand, jobless claims rose by 16k to 357k and the consumer confidence declined during March. Nonetheless, the slow progress of the U.S economy and the rise in the stock market is pulling investors out of precious metals.  Due to the Holiday, the markets were closed on Friday in Europe and U.S.

Here is a short recap of the developments in precious metals prices between March 25th and March 29th:

During the previous week, the average daily percent changes of gold reached 0.14%; silver had an average daily change of -0.265%.

The chart below presents the developments of precious metals, as their rates are normalized to 100 as of March 22nd. Gold and silver prices have had a moderate downward trend during last week. 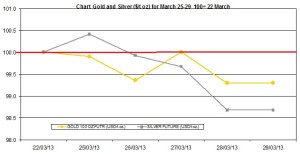 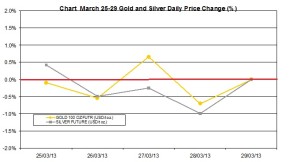