It’s an interesting time for bullion investors because gold and silver prices are being pulled in different directions, which as of last week at least, resulted in both precious metals losing some ground. On the one hand, long term interest rates have been rising as government treasuries not only in the U.S. but also in Europe have been selling off as the markets prepare for less stimulus from ECB and perhaps even hikes of the cash rate by BOE and FOMC in the coming months. On the other hand, the USD has been selling off, which should have provided a boost to bullion prices. But at least for the last week the selloff in treasuries seem to have had a bigger impact on the direction of both gold and silver rather than the selloff of the USD. What’s next?

This short week will be about the US economy with the minutes of the FOMC leading the way on Wednesday; if the minutes reveal less certainty about the Fed’s willingness to raise rates – especially considering the markets are more accepting of the Fed’s current hawkish outlook – then we may see a recovery in treasuries and drop in LT yields – something that could have a positive impact on bullion.

the non-manufacturing PMI report will be out the next day and could serve as a preview for the NFP report that will be released on Friday.

When it comes to the NFP, currently the markets anticipate a gain of 175K in jobs and wage growth of 0.3% month over month, which comes to around 2.6%, year over year. If these numbers were to be met, the report could send gold and silver prices further down because it will reinforce the markets’ belief that the Fed will move on raising rates later this year and start normalizing the balance sheet as soon as September.

But any sign of additional weakness – as was the case in recent months – from the NFP report on jobs growth or more importantly on wage growth could reverse the latest fall in gold and silver prices by driving further down LT yields.

Finally, it should be noted that the USD is still a key factor in moving bullion prices. But in recent months, LT yields may have played a bigger role as you can see in the moving correlation of daily percent changes of gold and 10-year treasury yield. 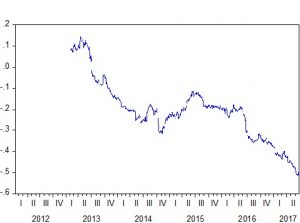 Where does it leave gold and silver?

I suspect the bullion market will keep taking its lead from the treasury market. As long as the market expects more hawkishness from the Fed – and more importantly data to support raising rates such as higher wage growth – gold and silver aren’t going up. But if we get another weak report from the NFP and perhaps even a bit less hawkishness in the Fed minutes , we could see a quick shift in market sentiment that will drive down LT yields, inflation expectations and pull back up precious metals.