Gold and silver gained a bit more momentum as the political unease playing in the background and some economic data from the U.S. aren’t too impressive. The markets, however still place a high chance – around 80% — of a rate hike in June by the FOMC. A dovish surprise could help drive further down long-term interest rates, which, in turn, could also help boost the demand for precious metals. This week’s non-farm payroll report will be the last major economic data point that could tilt the scales towards no rate hike next month.

So where do we currently stand when it comes to the FOMC’s next rate hikes. Unlike in March the doves of the Fed including Williams and Brainard are less enthusiastic about raising rates sooner rather than later; the recent economic data including CPI and the last NFP report didn’t really make the case for a rate hike; and even long-term interest rates have slid back to where they were in November 2016.

On the other hand, the recent GDP estimate for Q1 was revised up to 1.2%, short term rates are still picking up and the sentiment in the market is still positive.

For the Fed to raise rates in June, the upcoming NFP report will have to present a pickup in wages; last time, hourly earnings rose by only 2.5% on a yearly basis – this pace isn’t something that should make the Fed alarmed by the possibility of an inflation eruption anytime soon. And then there is the following statement from the minutes of the recent FOMC meeting:

“Members generally judged that it would be prudent to await additional evidence indicating that the recent slowing in the pace of economic activity had been transitory before taking another step in removing accommodation. “

This statement seems – which could be summed as “we remain data dependent” – as if the FOMC members are open to the possibility that perhaps the weakness in the U.S. isn’t transitory. And the upcoming NFP report could make that case.

Currently, the markets expect the NFP to reach a growth rate of 186K in jobs and monthly growth in wages of 0.2%, which comes to 2.5%, year on year. In this stage in the business cycle the wage growth should play a more important role in determining the Fed’s next move than the headline growth in jobs. Although any plunge in jobs growth will definitely take center stage in the markets.

Therefore, if wage growth were to remain around 2.5% I think the Fed will be less incline to raise rates in June; in turn, this could provide another short-term boost to gold and silver prices.

The only known unknown is how the markets were to react to any guidance coming from the Fed regarding shirking the balance sheet. So far, it seems to have had little impact. But as we all know things could change rather fast.

Finally, I would like to show the progress of gold’s volatility as calculated using a GARCH model. 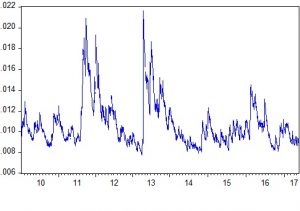 In recent months volatility remained very low, although the chart does show that after times of very low volatility there tends to be a spike. The next spike, if it were to come in the near term, could be more to the upside given the currently high expectations of another hike in June, and the slowly falling chances of fiscal stimulus from the Trump administration – at least this year.