The prices of gold and silver continued their downward trend and slightly fell for the second consecutive day. Their decline didn’t coincide with the depreciation of the USD against the Euro and Aussie dollar. The Reserve Bank of Australia has decided to keep its cash rate unchanged. Nonetheless, earlier today the Aussie GDP for the third quarter was released in which the economy grew by only 0.6% – This rate was lower than expected. This could partly explain the current sharp drop in the Aussie dollar against the USD. This reaction might also pressure down gold and silver prices that tend to be correlated with the Aussie dollar. Will gold and silver continue to fall? On today’s agenda: American and Canadian Trade Balance updates, GB Services PMI, ADP estimate of U.S. non-farm payroll, U.S New Home Sales, Bank of Canada’s Overnight Rate, U.S ISM Non-Manufacturing PMI.

Here is a short overview for bullion for Wednesday, December 4th: 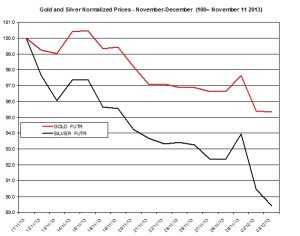 The ratio between the two precious metals rose again on Tuesday to 64.19. During the month, the ratio increased by 2.66% as silver has moderately under-performed gold. 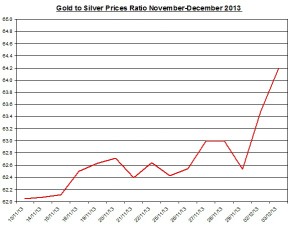 The gold and silver futures volumes of trade have further diminished and reached on Tuesday 126 thousand and 47 thousand, respectively. The volume of trade may pick up in the following days. 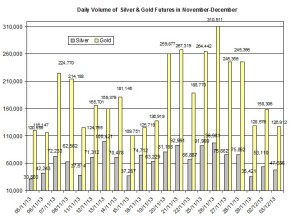 GB Services PMI: In the previous report, this index sharply increased to 62.5; this index may affect the British Pound’s direction;

Canadian Trade Balance: In the recent report regarding September 2013, exports rose by 1.8% and imports inched up by 0.2%; as a result, the trade balance’s deficit narrowed from $1.1 billion in August to $435 million in September; this report may affect the Canadian dollar, which tends to be correlated with commodities;

American Trade Balance: This monthly update for October will show the changes in imports and exports of goods and services to and from the U.S, such as commodities such as oil and gas; based on the last American trade balance update regarding September the goods and services deficit expanded to $41.8 billion – its highest level since July;

Bank of Canada’s Overnight Rate: The Bank of Canada will announce of any changes to its overnight rate decision – the rate is currently at 1%. The BOC may maintain its interest rate; the economic developments in Canada might prompt BOC to eventually cut its rate;

U.S. ISM Non-Manufacturing PMI: This monthly report will refer to November 2013. In the previous report, this index rose to 55.4% – the non-manufacturing sector is growing at a faster rate compared to the previous month; this index may affect the US dollar;

U.S. New Home Sales: This report will pertain to November 2013; in the recent report (opens pdf; for October), the sales of new homes sharply rose to an annual rate of 421,000 – a 6.8% rise (month-over-month); if the number of home sales keep rising, this may suggest the housing market in the U.S is reheating;

Australian Trade Balance: In the last update, for September, the seasonally adjusted balance of goods and services reached a $280 million deficit. The export of non-monetary gold decreased by $1 million; if gold exports change direction and rally, it might suggest a rise in demand for non-monetary gold (see here latest update);

On Tuesday, the Eur/USD currency pair slightly rose by 0.34% to 1.3588. During December, the Eur/USD inched down by 0.02%. Further, other currencies such as the Aussie dollar slightly appreciated yesterday against the U.S dollar by 0.27%. The correlations among gold, silver and Euro remained mid-strong in recent weeks, e.g. the correlation between the Euro/USD and gold price is 0.48 during November/December.

← Will Natural Gas Continue to Heat Up?
Gold and Silver Outlook for December 2013 →