Gold and silver continued to trade down yesterday. Their decline coincided with the depreciation of “risk currencies” such as the Euro and Aussie dollar against the USD.  The lower than expected EU GDP growth rate in the fourth quarter may have been a contributing factor for the decline of not only the Euro/USD but also precious metals.  Yesterday it was reported that U.S jobless claims declined again by 27k to reach 341k. This news may have also helped rally the USD. Will gold and silver continue to fall? The recent gold related news is that big investors including Soros and Bacon are cutting their exposure to gold. Another report suggests a decline in the demand for gold as a safe haven investment on account of the expected recovery of the U.S in 2013. Currently, gold is plunging. On today’s agenda: GB Retails Sales, U.S. TIC Long Term Purchases, UoM Consumer Sentiment and G20 Meeting.

Here is a short outlook for precious metals for Friday, February 15th:

The decline of precious metals rates coincided with the developments in the forex market: The Euro and Aussie dollar depreciated against the USD by 0.68% and 0.12%, respectively. The linear correlation between and several leading currencies pairs such as EURO/USD and AUD/USD are still mid-strong at 0.20 and 0.42, respectively. They suggest that if these currencies will continue to fall against the USD, they may pull down bullion rates.

In the chart below are the normalized price of gold and silver during the month (normalized to 100 as of January 31st). The prices have had a downward trend during recent weeks. 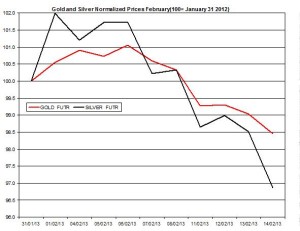 The ratio between the two precious metals increased on Thursday to 53.86. During the month, the ratio rose by 1.64% as gold out-performed silver. 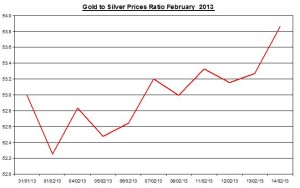 Retails Sales GB (January 2013): This report will show the changes in the retails sales in Great Britain for January 2013. It may affect the path of the British Pound currency. In the recent report regarding December 2012, retails sales edged down by 0.1%;

U.S. TIC Long Term Purchases: The Treasury International Capital monthly report will show the changes in the purchases and sales of US long term treasuries for December 2012. In the recent report regarding November 2012, the net foreign sales of U.S Treasuries longer-term notes rose by $52.3 billion;

UoM Consumer Sentiment (preliminary): University of Michigan will publish its preliminary consumer sentiment update; this survey could offer an insight to recent developments in U.S consumers’ sentiment; based on the previous update, the sentiment index declined again to 71.3;

G20 Meeting: the G20 will convene for two days in order to talk over the recent economic developments in the world;

Current Gold and Silver Rates as of February 15th

Prices of gold and silver fell yesterday. Their decline may have been part of the decline in risk related currencies yesterday. The upcoming G20 meeting might influence bullion traders if in the summit there will be big headlines coming out of it. The upcoming U.S related reports TIC Long Term Purchases and Consumer Sentiment could affect not only the USD but also precious metals. If TIC long term purchases will rise, this could suggest the market is taking a turn to become more risk averse, which could also shift back the demand for other safe haven investment such as gold and silver. On the other hand, if the consumer confidence will rally, it could strengthen the USD, which will bring down bullion rates. Finally, if the Euro and other “risk currencies” will continue yesterday’s tumble, then this could also pull down precious metals.