The market sentiment seems to have shifted gear again as precious metals bounced back and spiked on Thursday. The recent decision of the ECB to keep the interest rate unchanged along with the reassuring words of ECB President that EU might show signs of recovery during the year.  This news may have contributed to the sharp rise in the Euro and commodities prices. U.S jobless claims rose by 4k to reach 371k. Will precious metals change course again and trade down? Currently, gold and silver are declining. On today’s agenda: Great Britain Manufacturing Production, Canadian Trade Balance, U.S. Federal Budget Balance and American Trade Balance.

Here is a short outlook for precious metals for Friday, January 11th:

In the chart below are the changes in the normalized prices of precious metals during the month (normalized to 100 as of December 31st). During recent days, the prices of silver and gold have moved zigzagged from ups to downs. 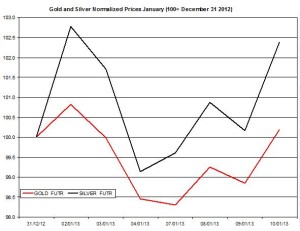 The ratio between the two precious metals declined on Thursday to 54.32. During the month, the ratio fell by 2.14% as gold has under-performed silver. 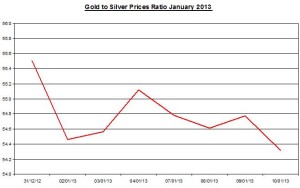 During the month the volatility of gold has picked up compared to December while silver’s has declined: the standard deviations of gold and silver (daily percent changes) reached 1.06% and 1.76%, respectively. 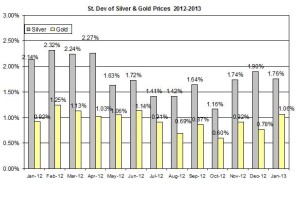 American Trade Balance: This report will show the developments in imports and exports of goods and services to and from the U.S, including commodities; according to the recent American trade balance report regarding October the goods and services deficit rose during the month to $42.2 billion;

U.S. Federal Budget Balance: this upcoming publication will show the changes in the U.S federal balance for December 2012; this report indicates the government debt growth and thus may affect the U.S dollar. In the previous report regarding November the deficit grew by $172 billion to a deficit of $292 billion for the fiscal year of 2013. In comparison, the deficit in the same time in 2012 was $235 billion; this is an increase of 24% compared to 2012.

Great Britain Manufacturing Production: this report will present the yearly rate of GB’s manufacturing production for November; in the previous report regarding October the index decreased by 1.3% (M-2-M); this news may affect the British Pound;

Canadian Trade Balance: In November, exports increased by 1% and imports declined by 1.2%; as a result, the trade deficit contracted from a $1 billion deficit in September to $0.169 billion deficit in October; this report may affect the Canadian dollar which tends to be linked with precious metals;

The Euro/ USD spiked on Thursday by 1.58% to 1.3271. During the month, the Euro/USD rose by 0.6%. Moreover, some currencies such as Aussie dollar also appreciated on Thursday against the USD by 0.83%. The movement of these currencies seems to affect precious metals, even though the correlations among gold, Euro and Aussie remained weak: during December and January, the linear correlation between gold and Euro /USD is at 0.07 (daily percent changes); the linear correlation between the gold and AUD/USD was 0.21 (daily percent changes). Nonetheless, if the Euro and other risk currencies will change direction and fall against the USD, they might pull down precious metals.

Current Gold and Silver Rates as of January 11th

Prices of precious metals shifted gear again and spiked on Thursday. This sharp rally may have been driven by the rise in other commodities prices and the Euro. The sharp rise in precious metals could take another turn and correct on today’s trading. Today’s report including U.S. trade balance and Federal budget balance could affect not only the USD but also precious metals. If these reports will show the U.S economy is progressing, this could adversely affect precious metals via the USD.  The uncertainty around the future steps U.S policymakers will take in raising debt ceiling or the future spending cuts might affect bullion in the weeks to come. Finally, if the Euro and other “risk currencies” will depreciate against the USD, they might adversely affect gold and silver.