Gold and silver continue to seek direction as they have changed direction again and tumbled down yesterday. The ongoing recovery of the U.S stock market is plausibly pulling investors out of safe haven investments such as gold and silver and into the stock market. Major “risk related currencies” such as the Euro and Aussie dollar moved in a mixed trend yesterday. The minutes of the recent FOMC meeting was published yesterday. The minutes did have any earth-shattering headlines:  Several FOMC members still voiced their concern regarding the risk associated with the asset purchase program. This news may have contributed to the sharp fall in the prices of gold and silver. In other news: China’s trade balance reached a deficit as of March; U.S federal budget’s deficit grew by $106 billion in March and reached a total deficit of $600.4 billion during the fiscal year of 2013 – a 23% drop (year over year). Will gold and silver continue to decline? Currently, the prices of gold and silver are falling. On today’s agenda: ECB Monthly Bulletin, Italian 10 Year Bond Auction, and U.S. Jobless Claims.

Here is a short outlook for precious metals for Thursday, April 10th:

In the chart below are the normalized rates of gold and silver between March and April (normalized to 100 as of February 28th). The rates of precious metals resumed their downward trend of the several weeks. 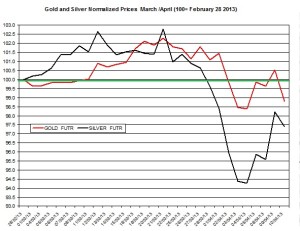 The ratio between the two precious metals fell again on Wednesday to 56.36. During April, the ratio remained nearly unchanged and edged down by 0.02% as gold performed much like silver. 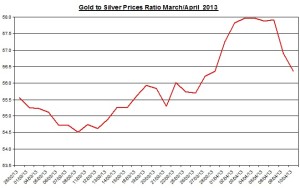 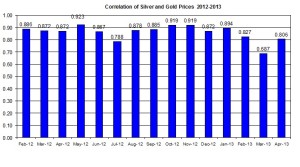 ECB Monthly Bulletin: This monthly update for March analyzes the economic shifts of the Euro Area such as the price stability, interest rate decisions and governments’ debt; this update may shed some light on the expectations of the EU growth;

Italian 10 Year Bond Auction: the Italian government will come out with its monthly with bond auction; in the recent bond auction, which was held at the end of March, the average rate reached 4.66% – a lower rate than February’s auction;

The Euro/ USD inched down on Wednesday by 0.08% to 1.3073. During April, the Euro/USD increased by 2.01%. Conversely, other currencies such as the Aussie dollar and Canadian dollar appreciated again yesterday against the U.S dollar by 0.51% and 0.22%, respectively. The appreciation of several “risk related currencies” against the USD didn’t seem to help rally gold and silver prices.  The correlations among gold, Euro and Aussie dollar remained weak during March/April: the linear correlation between gold and Euro/USD was -0.03 (daily percent changes); the linear correlation between the gold and USD/CAD reached 0.29 (daily percent changes). These weak relations suggest the recent decline in the prices of precious had little to do with the daily changes in the foreign exchange markets.

Current Gold and Silver Rates as of April 10th